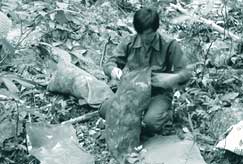 a meeting of the Convention on Biodiversity (cbd) will be held in February in Bangkok to discuss rules for international transfer of biological resources. In preparation, ministerial delegations of a group of developing countries called the Like Minded Megadiverse Countries (lmmc) met January 20-21 in New Delhi to develop a common position on biodiversity issues. Seventeen countries including Brazil, China, India and Mexico took part in the meeting which ended with a declaration on their aspirations.

lmmc came about because the member countries -- possessing 70 per cent of the world's biodiversity and 45 per cent of its population -- wanted a bulwark against the interests of mostly developed nations that have been profiting from biological resources and traditional knowledge from developing countries, but not sharing the benefits.
A lot is at stake in the forthcoming negotiations. Although developing nations are now formulating national legislation that requires companies to take permission for research and developing products from their biological resources and traditional knowledge, there is widespread concern over resources illegally making their way to research laboratories in developed countries. The head of the Mexican delegation, Jorge Sobern, said, "Under current Mexican law, it is illegal to, say, take an indigenous plant from, say, a tribe in southern Mexico without permission, but once it is outside the country, the company can do whatever they want to and that is a problem."

It is unclear how much of a problem bio-piracy is, though a few high profile cases, such as the application of a patent for a product based on Neem, aroused fears and a recognition of the value of biological resources. A patent that misappropriated biological resources can be challenged in court as happened with the Neem patent. Since the patent has to be challenged in the country where it was granted, developing nations assert this places an undue burden of costly litigation on them. They demand that the onus for proving the legality of the biological resources should lie with the companies using them.

Everton Vargas, director general, environment and special affairs, ministry of foreign relations, Brazil said, "In a way, lmmc can play the same catalytic role in the cbd, as does the g 20 in the wto ( World Trade Organization)." g 20 is a negotiating group representing the interests of developing countries in wto. lmmc members demand equitable sharing of the benefits from the use of their biological materials and the protection of traditional knowledge. A mandate to pursue this aim was achieved at the seventh Conference of the Parties to cbd in February 2004, where it was agreed that an international process or "regime" was required to guarantee this. The lmmc meeting attempted to expand on what exactly the international regime would entail.

In its ministerial declaration, lmmc asserted that the cornerstone of an international regime would be a legally binding agreement between cbd members . The group further stressed that any patent applications would require mandatory disclosure of the country of origin of all biological resources used, and proof of consent from that country. Contracts on sharing the benefits arising from the use of the biological resources would also be required.

A significant development was an agreement to have a concerted effort to address the issue of access and benefit sharing in international forums other than cbd, by "presenting joint proposals, if possible". During the course of the talks, wto's Trade Related Aspects of Intellectual Property Rights, commonly known as trips, and the agreements under the World Intellectual Property Organization, or wipo, came up. Previously, developing nations were only concentrating on negotiations on biodiversity in the cbd as they saw the other multilateral frameworks as less friendly.

Before such a coordinated policy can succeed, the lmmc needs to achieve consensus on some contentious issues. The group has been in existence for three years and is yet to come out with a concrete vision of what its members want from the cbd . The debate simply on whether a legally binding agreement would be feasible has taken a long time and many more complex issues will arise. As one delegate put it, we are "at the very frontier of known law." Each country has its own vision of how best to protect these resources.

Mexico prefers a lean international system under which a patent application merely has to prove that its materials were sourced legally by producing a "certificate of legal provenance" issued in the country of origin. According to Sobern: "The company might have to go through 100 steps in Mexico and 3 steps to fulfil in Costa Rica to get this certificate. What we want is that not only should, for example, the Japanese accept this certificate, but that the international regime should require it under Japanese law."


Another major point of contention within the lmmc is how best to protect traditional knowledge in an international framework. Pharmaceutical companies are becoming increasingly interested in developing products based on the knowledge of traditional communities around the world. Indian expert V K Gupta who presented a paper on traditional knowledge at the meeting, said the problem with protecting such knowledge is that the right holder may not be easily identified. It is hard to find out who to get permission from and who to compensate.

The eighth Conference of the Parties to cbd to be held in May 2006 will be the next opportunity to come to some agreement on the issues of accessing biological resources, but delegates were skeptical about an international regime being negotiated by then. A delegate from an African nation added: "We shouldn't expect a regime for another 5 years". The lmmc and its agenda are quite new and nobody is quite sure how non- lmmc countries will react. The same delegate added, "After Bangkok, most people will understand where they stand in terms of the negotiations," referring to the third meeting of cbd's Ad-Hoc Working Group on Access and Benefit Sharing from February 14-18. This meeting will be the first formal meeting where lmmc will present its new position.

Vargas of Brazil was more optimistic, and said it would be in the interest of many developed countries to get an agreement with the lmmc, and gain access to the world's richest biological resources. He cautioned, however, that the group would "have to be very clear where our interests lie", outlining the need to develop a strong consensus within the group. He also added that the fact that the us had not ratified cbd was a concern.