No guidelines for severe malnutrition in children 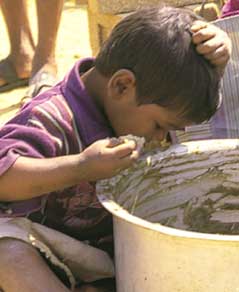 For the estimated five million severely malnourished children in the country, providing sufficient food might seem to be the obvious solution. Despite the existing programmes on child nutrition, the status of malnourishment has not changed much over the last 15 years.

Top nutritionists in the country recently suggested an approach that could make a difference. At a meeting held in Delhi from November 11-13, 2005, they strongly argued in favour of home-based treatment of severely malnourished children through grassroots workers. What they proposed is quite different from the line taken by the World Health Organization (who), which says cases of malnourishment should be treated in hospitals. But who's strategy is difficult to implement in India, which lacks the required health- care infrastructure.

"Right now the choice is between 'hospital care' and 'no care' and as a result, the child is not getting any care. Severe malnutrition takes months to treat and putting such children in hospital is not possible for poor people. They are forced to make a choice between the child's survival and that of the whole family," says Abhay Bang of the Society for Education, Action and Research in Community Health, a non-governmental organisation working on malnutrition in Maharashtra.

The experts at the meeting came out with guidelines for grassroots workers based on the success of home-based treatment in some African countries. Studies in Ethiopia and Sudan show 80 per cent of severely malnourished children treated at home recovered fully. The experts also felt the home-based treatment would encourage parents to understand how to deal with the problem if it recurs.

The involvement of grassroots workers is possible as they are already working on existing programmes on child nutrition. The major scheme that reaches every district is the Integrated Child Development Services (icds), implemented by the department of women and child development, Union ministry of human resource development (mohrd ). There are similar programmes under the Union ministry of health and family welfare (mohfw): the Reproductive and Child Health ii and the National Rural Health Mission (nrhm). The guidelines would help the Auxiliary Nurse and Midwife from the health department, the anganwadi worker from the department of women and child development and the Accredited Social Health Activist from nrhm to tackle the issue.

But these workers are often overworked and might not be interested in identifying all cases of severe malnutrition, for they would then be responsible for them. While some experts suggested private practitioners be involved to make government health workers more accountable, others said such a move would affect the latter's credibility.

Other issues that were discussed included the need to identify suitable food for the affected children. Food from the family pot was identified as the cheapest and the easiest to make. "It can be easily enriched with additives such as sugar and oil," says Piyush Gupta, University College of Medical Sciences, Delhi. Ready to use therapeutic food (rutf), which has worked well in addressing Africa's malnutrition problem, would need to be developed indigenously, keeping the preferences of the community in mind. The experience in Senegal showed both rutf and the food from the family pot work equally well for home care.

It was felt that there is a dire need to increase awareness even among parents. Health infrastructure has to be geared to provide information about malnutrition to mothers visiting health centres for antenatal checkups or to get their children immunised. Adolescent girls should be educated about the issue as a future investment. In rural areas, the panchayat should also be roped in to do its bit. Equally important is the need to identify an authority that would be responsible for implementing all such measures, the experts emphasised.

According to H P S Sachdev, department of paediatrics, Maulana Azad Medical College, Delhi, "The recommendations are based on theory and it is important the government test their efficacy through programmes like the icds." The recommendations will be published in Indian Pediatrics , the journal of the Indian Academy of Pediatrics, and circulated to nodal ministries including mohfw and mohrd. "The government is likely to accept the suggestions if sufficient evidence of success is provided," adds Bang.