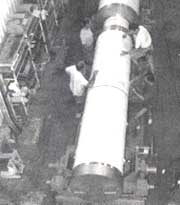 EVEN as the Greenpeace docks its 20- boat strong protest flotilla at the 'Mururoa and the Fangataufa atolls - the sites for the series of nuclear weapon tests that France proposes to conduct in the South Pacific - NewZealand, along with Australia, has come up with a new strategy to thwart the French.

It has decided to take the "offender" to court. It has asked the international Court of justice to reexamine a 1974 nuclear-test case against France. It was France's avowed intention to halt nuclear testing in the atmosphere that resulted in the Court dropping the twin cases brought by New Zealand in 1973. Even though the upcoming French test will be underground, New Zealand is basing its latest move on its 1973 complaint.

France, meanwhile, is acting tough. Particulady sore about the muted response of these countries to China's continuing tests, it has issued an official statement declaring that it would not look kindly on Australia and New Zealand reacting more harshly to France's upcoming nuclear tests than to China's August 17 explosion.