UP voters ask candidates for assembly election to take test 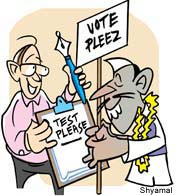 The recently completed assembly polls in Uttar Pradesh witnessed an unprecedented public practise. In the drought-stricken Bundelkhand region, voters asked the candidates to take a written test on the problems of the region. Called 'Face-to-face with the reality in Bundelkhand' and "Experience proforma", the test had 25 questions. Over 20 candidates took the test.

"People wanted an end to the rhetorical promises of politicians," said Pushpendra Bhai of the Gram Swarajya Prahari Prashikshan Sansthan, an ngo that works in the region and helped the villagers to conduct the test. According to Pushpendra, about 20,000 people from 380 villages in seven districts of Bundelkhand region had decided to boycott the elections and this time they wanted some answers to their problems.

The questions were quite candid and reflective of the plight of the farmers.The candidates were asked to comment on the recurring farmer's suicides in Bundelkhand, on the state's move to privatise water and also on the impacts of river-linking projects. Predictably, many of the candidates blamed the government's policies. Seeraj Dhwaj Singh, a Samajwadi Party candidate from Banda squarely blamed the World Bank. "It (the bank) will take the country to slavery," he said.

Many of them said "starvation and debts" triggered the farmer suicides in Bundhelkhand. The solutions suggested by them included better irrigation facilities and a change in the state's policies and priorities. Many of the respondents said the mlas allowances were very high and they have to be cut down.

The polls are over now and many of the respondents are in the assembly. Can Bundelkhand hope for a fair deal?