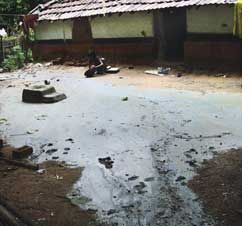 a tailing pipe carrying uranium waste from the Uranium Corporation of India Limited's (ucil's) processing plant in Jadugoda in Jharkhand's East Sighbhum district burst on August 16. It was the third such incident in the past two years.

The accident occurred near Chhotta Dungridih village, spewing radioactive waste and toxic slurry for about six hours before it could be contained. Local residents say eight houses were submerged under ankle-deep sludge, while many others were covered by the spillage. "The effluents flowing under high pressure covered surrounding vegetation," says Ishwar Soren, a village resident. "In December 2006, a similar incident contaminated water bodies in the area," says Sriprakash who has made several documentaries on the hazards of exposure to radioactive waste. In February this year, another tailing pipe burst inundated houses in the village. Following this, the ucil management had promised to relocate Chhotta Dungridih residents to a safer place but no step has been taken yet.

The ucil management, however, plays down the incident. "The leakage was minor and covered only a few trees," says Ramendra Gupta, managing director of ucil. Chairperson of the Atomic Energy Regulatory Board (aerb), S K Gupta, denies any radiation leak during the recent spillage. "Uranium ore in these mines are of very low grade, with less than 0.3 per cent uranium content. We checked the radiation level soon after the leak. It was much below the normal range," he says. "Most of the effluents from the plant are neutralized using lime before releasing them into tailing pipes."

But M V Ramana of the Centre for Interdisciplinary Studies in Enviro-nment and Development, Bangalore, says tailings from the plant also contain a number of toxic chemicals that are extremely corrosive in nature.

Responding to an rti query filed by Sriprakash in 2007, ucil had stated that most tailing pipes were made of mild steel with internal rubber lining and that periodical replacement and regular inspection were carried out to avoid any leakage. Sriprakash refuses to belive these claims after the spillages.

Meanwhile, ucil has once again promised to resettle the residents of Chotta Dungridih at a safe location.