Sofosbuvir's prohibitive cost will put it out of reach of most patients in developing countries, including India

The US Food and Drug Administration (USFDA) has approved Sovaldi (sofosbuvir) to treat chronic hepatitis C virus (HCV) infection. The drug has the potential to bring relief to millions of people across the world who are suffering from the disease.

Marketed by US drug makers Gilead Science, Sofosbuvir is a nucleotide analog inhibitor that blocks a specific protein needed by the hepatitis C virus to replicate itself. The new medicine is to be used as a component of a combination antiviral treatment regimen for chronic HCV infection.

Its effectiveness was evaluated in six clinical trials consisting of 1,947 participants who had not previously received treatment for their disease or had not responded to previous treatment. Results from all clinical trials showed a treatment regimen containing Sofosbuvir was effective in treating multiple types of the hepatitis C virus, says USFDA in its statement.

The most common side-effects reported in clinical study by participants, who were treated with Sofosbuvir and different combination drugs, were fatigue, headache, nausea, insomnia and anaemia.

Sofosbuvir is a ‘direct-acting antiviral’ for hepatitis C, and results in significantly higher cure rates in a shorter period of time than current therapy. Despite its efficacy, Sofosbuvir is unlikely to reduce disease incidence significantly because it would be out of reach for the majority of patients.

The new drug is estimated to be priced up to $80,000 for a 12-week treatment course in the US. While prices in developing countries are still unknown, it is likely to far exceed what patients and governments can afford.

In India, a “patent opposition” for sofosbuvir was filed on November 21, this year by the legal group Initiative for Medicines, Access & Knowledge (I-MAK), a US based not-for-profit group. The group filed its patent opposition in the Intellectual Property Office, Kolkata.

I-MAK complained, “HCV is a significant public health issue for low- and middle-income countries, that are home to 90 per cent of the 185 million people who are infected with HCV. Although HCV is curable, high drug prices make treatment inaccessible, leaving people at risk of liver cancer or liver failure.”

I-MAK filed an opposition against Gilead/Pharmasset's patent applications because it says it believes that the technologies comprising these patent applications are known and therefore undeserving of a patent grant. “We also believe that it is now time that People Living with HCV obtain affordable access to the drugs they need,” says I-MAK.

A recent study released by researchers at Liverpool University at the  American Association for the Study of Liver Diseases conference in November found that sofosbuvir is relatively simple and cheap to produce, somewhere at $68-$136 for a 12-week treatment course.

The World Health Organization (WHO) says that about 150 million people are chronically infected with hepatitis C virus, and more than 350,000 people die every year from hepatitis C-related liver diseases.  Prevalence of HCV in India is high (see graph 'Prevalence of hepatitis C, country-wise'). 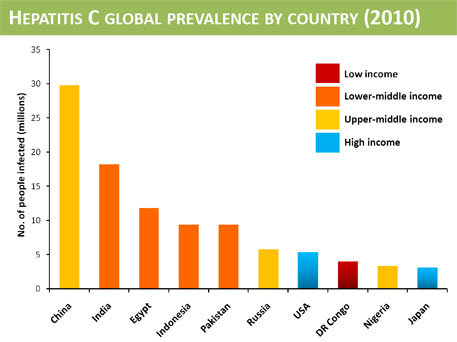