Microsoft Corp of USA has launched a Japanese version of the Windows 3.1 software package, which is expected to grab for it control of Japan's personal computer market. 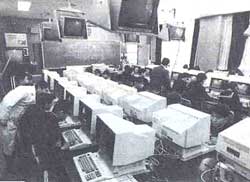 EVEN AS Japanese computer firms plan to shift production of their personal computers to Taiwan in order to reduce costs, Microsoft Corp of the US has launched a Japanese version of its Windows 3.1 software package in an effort to dominate the world's second-largest personal computer (PC) market.

This is expected to boost PC sales in Japan's "keyboard allergic" culture and also give an edge to US firms in their price war with Japanese giant NEC Corp, which controls more than half the country's PC market.
US PC makers are optimistic that Windows will make it possible to run software on otherwise incompatible NEC and US-made PCs and to counter NEC's advantage in Japanese language software. The Windows software package found easy acceptance in the US and other parts of the world because it allows the manipulation of files and data graphically, which makes PCs easy to use.

However, though Microsoft has sold 25 million copies of its package worldwide, it flopped in Japan, as an earlier version -- Windows 3.0 -- was prone to errors. Windows 3.1 should be able to erase the negative impression. In fact, computer magazines suggest the new version will sweep the market.

With the PC price war continuing to rage and the yen rising sharply against foreign currencies, Japanese PC producers are looking for greener pastures for their PCs.

Leading Japanese computer manufacturer Fujitsu Ltd is currently negotiating with Acer, Taiwan's largest computer producer, to produce PCs, while Sharp Corp has announced it will ask Taiwanese and South Korean companies to produce its next PC.

Taiwan is an ideal choice because it boasts a well-established computer and information systems industry. Besides, though the costs of manufacturing has risen in Taiwan, it is still much lower than in Japan.