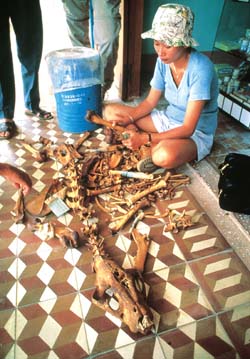 the us has officially launched a global initiative to fight illegal wildlife trade. The Coalition Against Wildlife Trafficking (cawt) comes despite the fact that there are two international conventions to control trade in wildlife the Convention on International Trade in Endangered Species (cites) and the Convention on Biological Diversity.

"Conventions like cites are strong on the protection side but often national governments do not have the resources or expertise to enforce the restrictions," said Claudia McMurray, the us assistant secretary of state for environmental affairs, during the launch of the coalition at the United Nations Environment Programme (unep) in Nairobi , Kenya, on February 10.Initiated by the us in 2005, cawt now has the support of the uk, India and Australia. Conservation groups like the World Conservation Union (iucn), Conservation International and wwf, scientists and industries, too, are part of the initiative.

But while following cawt, will the coalition countries undermine cites and cbd? Wildlife experts do not think so. "cites in particular is a strong convention. However, the Indian government is yet to incorporate its recommendations into the Wildlife Protection Act of India, 1972, which makes cites implementation difficult," says Rahul Dutta, Indian coordinator of traffic, a network that monitors wildlife trade.

"Poaching and illegal wildlife trade is rampant in India. With cawt in place, at least ngos will now be able to generate political support to force the government to follow cites recommendations," says Biswajit Mohanty, secretary, Wildlife Society of Orissa. According to Tito Joseph, programme officer at the Wildlife Protection Society of India, "cawt is not a duplication of existing conventions or laws. It will enhance existing policies."