US not keen to trade freely 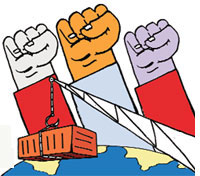 IN JULY 2008, when the Doha talks to liberalize trade among member countries of the World Trade Organization (WTO) broke down, the US blamed India. This year, when India tried to revive the talks at a two-day informal meet of ministers from 30 countries in Delhi, the US did not seem keen to clinch the agreement. The two-day mini-Doha meeting was held on September 3-4.

At the end of the meeting Indian commerce minister Anand Sharma said all member countries have agreed to resume talks and the agreement would be finalized in 2010. But US trade representative Ron Kirk disagreed. "We need more market access and jobs. The special safeguard mechanisms (SSMs) and special products (SPs) need to be reviewed," he said. SSPs allow developing countries to slap additional duties on imports to protect their domestic market. Special products are goods on which developing countries can impose maximum allowed duty.

Commenting on the US stand, agriculture scientist Bhaskar Goswami of advocacy group Forum for Bio - technology and Food Security said the priority of the developed countries is tackling recession. They are not interes - ted in brokering a deal now, he added.

While delegate ministers and officials negotiated the agreement, over 50,000 farmers held a protest demonstration at Jantar Mantar near Parliament House. They were demanding that agricultural trade be dropped from the Doha talks, on since 2001. Farmer leader Mahendra Singh Tikait, who led the rally, said, "If the government goes ahead and signs the agriculture deal, there will be civil war. What else will 650 million farmers do if they do not have food to eat?" A confederation of farmers' organizations, the Indian Coordination Committee of Farmers Movement (ICCFM), issued a statement saying India should walk out of the WTO if it cannot make the US and the EU reduce their farm subsidies.

"Heavy farm subsidies in developed countries make their products cheaper resulting in depression in the international agriculture market," said Yudhvir Singh of ICCFM. Afsar Jafri of nonprofit Focus on Global South said the current negotiations are based on a draft text prepared by the chair of agriculture of WTO in December 2008 which has watered down safeguard mechanisms. "The actual number of special products would be just 35 to 40," said Jafri. "Given our large agricultural base, India needs to have a large number of SPs to protect farmers," said Shefali Sharma of non-profit Third World Network. She said the SSMs would not protect farmers either as it involves lengthy procedure.