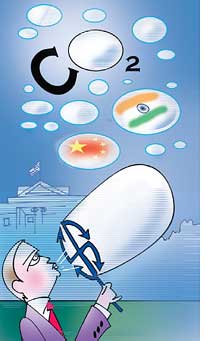 There are no more soft options on climate change. The two candidates running to be the future president of America realize this better than does George Bush, who even questioned the scientific basis of climate change. In a departure from the present us administration's insistence on voluntary cuts in carbon emission, both Barak Obama of the Democratic Party and Republican John McCain have been vocal about mandatory emissions reductions on the domestic front.

The us environment magazine, Grist, and Outside jointly conducted interviews last July of the presidential candidates on what they proposed to do to mitigate global warming if elected. In the interview Obama has called for reduction in emissions by 80 per cent below 1990 levels by the year 2050. It is in keeping with recommendations made by the Intergovernmental Panel on Climate Change (ipcc) for developed countries. McCain has set a lower target of 60 per cent.

President Bush, on the other hand, refused to undertake targeted emissions cuts unless India and China accepted comparable cuts. The Kyoto Protocol set these cuts specifically for industrialized countries partly because of their historical emissions and because developing countries had other overriding priorities: economic development and poverty eradication.

The us remains the world's biggest polluter with its per capita greenhouse gas emissions at more than 24 tonnes. Yet both Obama and McCain would like to see binding targets imposed on India and China. "We need a global response to climate change that includes binding and enforceable commitments to reducing emissions, especially for those that pollute the most: the United States, China, India, the European Union, and Russia," writes Obama in the July-August issue of Foreign Affairs. He and McCain have also hinted at trade penalties for countries that fail to sign the post-2012 climate agreement nations are currently negotiating.

McCain wants the same environmental standards that are applied to us industries to be imposed on industries in China and India besides the European Union and Russia. The draft text of his climate policy speech read: "If industrializing countries seek an economic advantage by evading those standards, I would work with the European Union and other like-minded governments that plan to address the global warming problem to develop a cost equalization mechanism to apply to those countries that decline to enact a similar cap." He later toned down "cost equalization mechanism" to say "effective diplomacy, effect a transfer of technology, or other means" when he finally delivered the speech on May 12 in Portland, Oregon. Aides reportedly said he did not want to be misinterpreted as being opposed to free trade, which is central to his campaign.

The candidates plan to slow, stop and reverse the growth of greenhouse gas emissions. They propose to achieve all this through a cap-and-trade mechanism. First set a limit or cap on emissions, which is then divided as emission allowances or permits among the polluting industries. Those that emit less than their limit trade their allowances to industries that exceed their target. The allowances can be traded at an auction, given for free to polluters or a combination of the two. Obama prefers to auction all the allowances as it ensures that the polluters pay for their emissions. "Businesses don't own the sky, the public does, and if we want them to stop polluting it, we have to put a price on all pollution" said Obama in a speech in October 2007.

McCain says he would auction some of the permits but would give away the majority to industries for free. Permits to emit carbon must be used for public benefit and not private windfalls for polluting industries, says Carl Pope, Executive Director of the Sierra Club. In Europe, power utilities continue to reap huge profits from the free distribution of emission permits. These profits have come at the expense of the consumers, says he.

The market approach may not be entirely bad, says David Sandretti, Communications Director of the League of Conservation Voters, a us -based environmental advocacy organization. "We can use the market to force reductions in greenhouse gas pollution by making polluters pay to pollute--via the cap-and-trade system," he says.

To make his point he refers to the cap-and-trade system of the previous Bush administration that virtually eliminated sulphur dioxide emissions.