US steps up efforts to protect forests; bars development projects 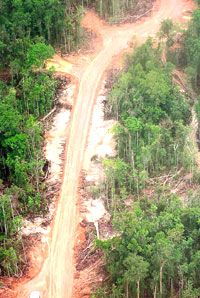 The us federal district court of northern California upheld the 'Roadless Area Conservation Rule' (roadless rule) on September 20, 2006. It provides protection to 20 million hectares (mha) of pristine forests and grasslands from road building, logging and development across the us, except for the Tongass National Park in Alaska, which is covered under a different rule. The court not only reinstated the roadless rule, but will also decide the fate of various projects that were cleared in roadless areas by the forest service under the Bush administration.

The court concluded that the service, which manages public lands in national forests and grasslands, did not adequately consider environmental impacts when it issued the State Petition Rule, 2005. This gives discretion to individual states to come up with their own plans in national roadless forest areas, thus diluting the roadless rule of 2001. The Bush administration, while replacing it with 'state petition rule', violated the law, the court observed.

The replacement of the roadless rule was in violation of two important environmental statutes: the National Environmental Protection Act (nepa) and the Endangered Species Act (esa). The legal requirement of an environmental impact statement (eis) and public comments under nepa , and a mandated 'impact study' on endangered species under esa, was not followed by the forest service in 2005. The service maintained that there was never any repeal of the roadless rule because it never went into effect after the federal government's intervention and various court cases. Besides, there was no requirement for impact studies since it was just asking states to file their plans on the future of roadless areas.

While rejecting this argument, the court acknowledged that the state petition rule was new and thus needed to go through the procedural requirement of any new rule under the law. But it also noted that the forest service itself found in 2001 that the 'roadless rule' was "necessary to protect social and ecological values and such adoption ensured that forest areas will be managed in a manner that sustains their values".

This case was filed by conservation groups like the Sierra Club, National Audubon Society, Defenders of Wildlife and Greenpeace, represented by lawyers from Earthjustice, a non-profit public interest law firm dedicated to protecting the environment. Parallel petitions were filed by four states--California, Oregon, New Mexico and Washington.

The foundation of the 'roadless rule' was laid in 1999 when then president Bill Clinton ordered the forest service to initiate a nationwide plan to protect roadless areas within us national forests. It was adopted in 2001 after a three-year process involving more than 600 public hearings and drawing 1.6 million public comments. In 2001, when it was scheduled to take effect, the incoming president, George Bush, issued a moratorium on all regulations from the prior administration that had not been implemented, effectively killing the roadless rule. When the moratorium was about to expire, Bush issued another order postponing the implementation of the roadless rule by two more months.

These changes were attributed to the fact that the Bush administration gave a former timber lobbyist the post of under-secretary responsible for overseeing the forest service in 2002. While the case on roadless rule was under litigation, the administration issued the State Petition Rule in 2005 without due process under the law, which was challenged in the California district court. The forest service, which had so eagerly worked on the roadless rule under Clinton, didn't even defend it. "The roadless rule was seen as a Clinton-era rule and a major roadblock for developmental activities in these pristine forest areas under the Bush administration," says Shaun Goho of Earthjustice.

While this ruling will not put an end to the controversy, it has certainly put a rein on further dilution of conservation strategies. Environmental groups see this as a victory for the American people, who overwhelmingly supported the 'roadless rule' in 2001. The current change in the us Congress after this November's election might not have a direct effect on this case, but it is unlikely that the Bush administration will challenge the district court verdict. This ruling might get challenged by other interest groups though. But it will be difficult for either the administration or the courts to ignore public sentiment.