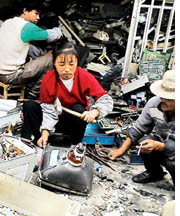 it seems the us is paying for its negligence on toxic-waste trade. A recent study says the country is flooded with Chinese jewellry made out of us-exported toxic e-waste.

Researchers studied the lead content in jewellry sold in retail stores in the us. They found the proportion of lead exceeded the permitted count set by the American Consumer Product Safety Commission.

The study by Jeffrey Weidenhamer from Ohio's Ashland University, usa, and fellow chemist Michael Clement, was published in the journal Chemosphere (May 2007). "A significant proportion had 90 per cent more lead, with 2-4 per cent of antimony (component of an alloy used in lead-acid batteries) content," says Weidenhamer.

The us has been widely blamed for promoting toxic trade.In 2002, a report on waste trade by the Basel Action Network (ban) showed that the us exports 80 per cent of its e-waste. Most of it went to China. Toxic wastes like computer circuits were melted in workshops in China under highly unprotected atmosphere, notes the report. The resulting lead alloy is available cheaper and becomes pet source material for costume jewellers who export it at throw-away prices.