It will be hard for people living in Uttarakhand, especially Uttarkashi, to forget the three days starting June 15, 2013. Incessant heavy rains during these days pretty much brought the mountains down. There are no confirmed figures of casualty or the number of people stranded, but estimates put the number of dead at 130;  around 75,000 are estimated to be stranded; and 7,000 missing. As the maximum damage has happened at places of pilgrimage, namely the Char Dham (Gangotri-Yamunotri-Badrinath-Kedarnath) route and Hemkund Sahib, most stranded people are pilgrims.

The warning from the meteorological centre in Delhi, which caters to the meteorological requirements of seven states of north India started to pour in for Uttarakhand from June 13. The 24-hours advance prediction of rather heavy rains (35.6-64.4 mm) on the first two days changed to heavy rains (64.5-124.4 mm ) by June 15. For June 16 and 17, the centre issued warning for extremely heavy rains (more than 244.5 mm). These were the two days when Uttarkashi and Chamoli district witnessed maximum rains and the resultant disaster. 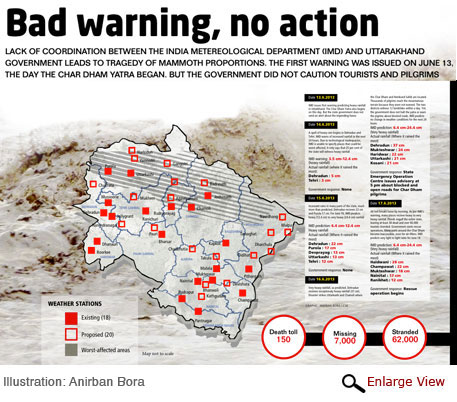 But the state did not swing into action despite the initial warnings. Though the IMD warning did not specify which areas in the state would be affected, a senior IMD official said knowing traditionally vulnerable places, one would know that Uttarkashi, Chamoli and Rudraprayag would likely be worst effected. What's more, despite initial reports of heavy downpour, it was only at 5 pm on June 16 that the Uttarakhand government issued a disaster warning, informing people about open and blocked roads to the four pilgrimage centres. The pilgrimage was still not  halted. It was not till 12 bridges broke down by June 17 morning that alert was issued and rescue operations started. Clearly, the state government merely reacted to the situation, and made no attempt to avert casualties.

Latest technology to assess and predict weather conditions, used in states like Jammu and Kashmir and Rajasthan, are also not available in Uttarakhand despite the known vulnerability of the state to such severe weather conditions.

North India has four doppler radars at Jaipur, Patiala, New Delhi and Lucknow and pilgrimage sites like Amarnath have automatic weather stations. None of these are installed in Uttarakhand.

"Doppler radar gives real time data, called nowcast, of a place. Its resolution is 1 km, giving hour by hour precise data for almost every inch. We can predict exact weather condition of an area three hours in advance," says O P Singh, deputy director of Delhi meteorological centre. Apart from its use in terms of precise predictions, the data generated is used for making forecast models better.

The Amarnath yatra in Jammu and Kashmir, which starts in late June and is scheduled for June 29 this year, happens in hilly terrain that is vulnerable to the vagaries of weather. Under the state-run shrine board's initiative, six automatic weather stations have been installed along the pilgrimage route. They analyse weather on various parameters and give hourly update about many conditions including rain, temperature and wind-speed.

"This helps in ensuring that pligrims do not leave the camp if there is trouble ahead. There has been no weather-related death in Amarnath yatra for the past many years. These should be installed in Uttarakhand too," says Singh.

It is estimated that for Char Dham and Hemkund Sahib, 10 such stations are required. As setting up each station costs Rs 4-5 lakh, the total initial investment would be Rs 40-50 lakh.
Even though the scale of destruction is not so high every year, flooding in monsoons is not new to the state. It is curious, thus, that the technologies that can save life are still to become part of weather forecast in Uttarakhand.

According latest information from Uttarakhand government, more than 7,000 pilgrims are stranded in Guptakashi on way to Kedarnath. No water or food has reached the area so far. One road has opened from the Haridwar side, while other routes namely Haridwar to Rishikesh, Rishikesh to Ghansali, Ghansali to Mayali, and Mayali to Guptakashi still remain inaccessible.

The road from Rudraprayag to Guptakashi is yet to open. There is no coordination between the district administration, the Indian Army and the National Disasater Management Authority, says a highly placed district official who does not wish to be named. These people need be rescued soon; time is running out, he adds. Till Thursday evening, about 2,300 stranded tourists and pilgrims had been rescued from affected areas.