Government denies it; its own data tells a different story 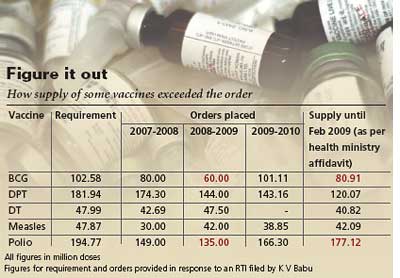 UNION health ministrys data shows procurement of vaccines for the current fiscal year is lower than required under the national immunization programme. But at a meeting of the parliamentary committee on health on October 26, ministry officials denied any shortage. The committee has asked it to submit documents in support of its claim.

The shortage was caused after the ministry suspended licences of public sector vaccine makers in January 2008. Until then 80 per cent of the vaccines for the national immunization programme were provided by public sector undertakings (psus). This slowed the already poor rate of immunization in the country (see Get your own vaccine, Down To Earth, July 1-15, 2009). There is no sign of improvement in the near future. 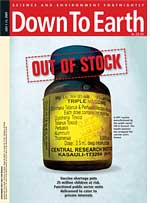 On August 3 this year, K V Babu, an ophthalmologist in Kerala, filed an rti application, asking whether the country is facing shortage of vaccines. He also sought information on steps being taken to revive public-sector vaccine makers and the number of people dying for lack of vaccines. A shortage was evident from the documents provided, said Babu. For example, the ministry said it needs 181.9 million doses of the dpt vaccine (against diphtheria, pertussis and tetanus) every year, but it has placed orders for 143.2 million doses for 2009-10.

The response to Babus application shows between April 2008 and March this year, 44 children died of diphtheria, tetanus and measles in Kalawati Saran Childrens Hospital in Delhi. Another rti application Babu filed in Kerala showed 17 cases of diphtheria were reported in the state during 2008-09, compared to three the previous year.

MP Brinda Karat wrote to health minister Ghulam Nabi Azad, asking him to explain how his ministry was able to give statistics showing more children getting immunized when it was procuring less and less vaccines. No explanation is forthcoming. Karat also asked him to take action to end vaccine shortage.

There is another discrepancy. The response to Babus application showed the ministry did not procure any vaccine from psus during 2008-09. This is contrary to the information the ministry provided Down To Earth in May in response to its rti application. Then the ministry had said it was getting vaccines from the closed psu, Central Research Institute (cri) in Kasauli.


When Azad was sworn in as the health minister on May 29 this year, he promised revival of public sector vaccine units in 100 days. Officials of cri Kasauli say there has been no progress. who had also suggested a plan to the ministry for reviving parts of the institute by November 2009. The ministry accepted the plan but did not stick to it. Rather than restarting psus the ministry is buying vaccines from private firms, who sell them at a premium.