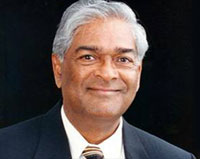 Sanjaya Rajaram, 71-year-old veteran plant scientist of Indian origin, has been declared the winner of the US $250,000 World Food Prize this week. Born in Varanasi in India and now a citizen of Mexico, he has been chosen for his contribution to increasing global wheat production by more than 200 million tonnes in the years following the Green Revolution.

Rajaram's made breakthrough achievement in successfully cross-breeding winter and spring wheat varieties, which were distinct gene pools and had been isolated from one another for hundreds of years, to develop plants that have higher yields and a broad genetic base. More than 480 high-yielding wheat varieties bred by Rajaram have been released in 51 countries on six continents and have been widely adopted by small- and large-scale farmers alike. Many of these varieties of disease-resistant wheat are adaptable to many climates.

The scientist who was born in a small village in Varanasi has dedicated his life to making direct improvements for farmers and all people who depend on agriculture.

The World Food Prize Foundation President and the former US Ambassador to Cambodia, Kenneth M Quinn, said the 2014 World Food Prize laureate is an individual who worked closely with Norman Borlaug   who established the World Food Prize in 1986 to focus the world's attention on hunger and on those whose work has significantly helped efforts to end it. Rajaram succeeded Borlaug in leading wheat research at the International Maize and Wheat Improvement Center (CIMMYT), Mexico, which was founded in 1966 through an agreement between the Rockefeller Foundation and the Mexican Secretariat of Agriculture.

He added, "Dr. Borlaug himself called Dr. Rajaram 'the greatest present-day wheat scientist in the world' and 'a scientist of great vision'. "

According to the World Food Prize Foundation, Rajaram’s new varieties can be grown in marginal areas, such as small mountain plots in Pakistan, remote areas in China, and in the acidic soils of Brazil. Reports also suggest that the scientist is now planning to give some amount from the prize money to research organisations in India who work with the poor.

Research: Impact of climate change on weeds in the rice-wheat cropping system