As developed and developing countries continue to disagree over key elements of the new climate deal in the works, civil society groups suggest ways to keep nations on track for the final deal in Paris 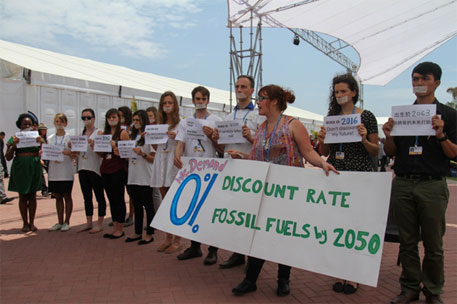 Progress in the UN climate negotiations continued to suffer from a failure to resolve deep-seated differences of opinion between countries about key issues that should be covered by the comprehensive new agreement to deal with climate change, due to be signed in Paris at the end of next year.

The agreement is expected to signal the world’s first collective shift away from fossil fuels and towards renewable energy, but to ensure that the deal reaches its full potential, developing countries need to be supported to take their own climate action.

“It feels like we're trying to land a helicopter in a storm. One of the ways to see the landing pad is to have a review process, which ensures commitments are fair and adequate and are going to get us out of this mess. Once we get a review then countries will start to trust the process again,” Adow added.

A new paper outlining elements of the 2015 agreement is due on Friday. “This needs to clearly lay out the options so that when ministers arrive next week they can see the decisions that need to be made here to keep us on the road to Paris,” said Adow.

Climate finance is a hot issue in Lima. Commitment to providing long-term climate finance is seen by many parties as a yardstick for measuring the willingness of richer countries to achieve a comprehensive climate agreement in Paris next year.

Alix Mazounie from Climate Action Network France said, “If we are serious about this, then the agreement should provide public finance to help the poorest countries but also, help shift the trillions of dollars that are shaping today’s economy and opting for dirty energy.”

“The good news is: phase-down of fossil fuel subsidies and high-carbon investments are among the options listed in the current ADP text that parties are discussing this week. These need to stay in and become a big piece of the Paris deal: fossil fuels are the contradiction in this process,” Mazounie said.

This element is vital to a fair agreement. Although rich nations like the USA and Japan have pledged to the Green Climate Fund, they are shamelessly spending billions more to subsidise fossil fuel expansion. Last year, fossil fuel subsidies in the G20 rose from $37 to 88 billion, according to a report of Oil Change International and Overseas Development Institute.

The money to finance a cleaner, fairer low carbon future is out there. But as long as rich countries continue to subsidise dirty energy expansion and fail to adequately support climate vulnerable countries, trust and progress at the UN climate negotiations will wane.

Chief negotiator for China Su Wei announced in Lima on Thursday that the country favours a 10-year commitment period for the climate agreement to be signed by the countries in Paris in a year's time.

Wei called for raised ambition from rich countries on pre-2020 emissions cuts and climate finance. The Chinese negotiator said that rich countries have committed to mobilise US$100 billion a year by 2020 to help the poor adapt to climate change and green their economies. But there is no clear roadmap or picture for meeting that target, he said.

He also said that the US$9.7 billion pledged to the Green Climate Fund is “far from adequate”.

China, however, drew criticism for seeking a 10-year commitment period. Greenpeace Senior Climate and Energy Advisor Li Shuo said, “To avoid the most severe impacts of climate change, China must remain ambitious and mandate the end of the first commitment period for the Paris agreement to be in 2025. Given the recent developments in China, such as the decline in coal burning and comprehensive measures to control air pollution, it would be pertinent for China to peak its coal consumption before 2020. Renewable energy technology is developing at a rapid pace and becoming increasingly affordable, yet we continue to drag our feet with our heads in the smog.”

The Paris agreement should capture the latest international developments in climate negotiations and enhance ambition for countries like China.

The European Union called for a 10-year commitment period, a surefire way to lock in low ambition in the future climate deal.

Five-year commitment periods ending no later than 2025 is the approach EU wants to follow in order to capture the fast evolving dynamics of domestic political and energy situation.

Australia said in an ADP session on the 2015 agreement that loss and damage should be an element of adaptation, not a standalone part of the Paris Protocol.

This is in direct opposition to countries most vulnerable to climate impacts, including those from AOSIS, LDCs, the Africa Group and AILAC, who want to see the agreement feature loss and damage as a separate issue and not bundled into adaptation.