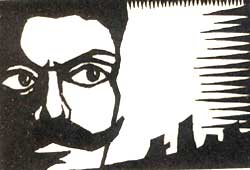 THE ELUSIVE sandalwood smuggler Veerappan has dealt another blow. Last month, he lured Mysore superintendent of police T Harikrishna and his men into a trap and mercilessly killed him and five other policemen. Harikrishna headed the special task force set up to nab the smuggler and had been 'informed' earlier that day that Veerappan was in the forests some 110 kms from Mysore. Just as the policemen reached the supposed site of Veerapan's hideout, they were mowed down with grenades and guns.

This massacre, coming just three months after the Veerapan gang killed five police in the same area and nine months after it beheaded P Srinivas, deputy conservator of forests, stunned the Karnataka state administration. In an unprecedented move, it wrote to the Centre for army help to catch Veerappan. When the body of the slain Srinivas was found, the administration had also talked about taking army assistance, but it fizzled out. Even the army may find it difficult. The vast, dense forests in the Karnataka-Tamil Nadu border areas are a formidable hideout for Veerappan, who has killed several police and forest officers in the 20 years he has plied his lucrative trade.