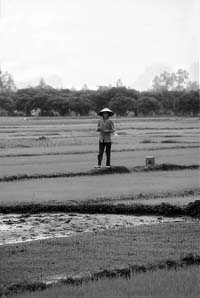 Vietnamese farmers are going through a bad time due to persistent drizzle that has affected supply of coffee in the province of Dalak. "The weather is now dangerous for the coffee business," said a trader. He said the drizzle in Dalak had disrupted the drying process. Dalak accounts for 60 per cent of the country's coffee crop. According to authorities, 50 to 60 per cent of Vietnam's 1998-99 coffee crop had been harvested but rainy weather remained a big obstacle.

Harvesting of coffee crop in Vietnam started in October and will last until January. An international coffee trader in Ho Chi Minh city said bean moisture was higher than the normal but it was still acceptable and no mould had been found in the recent shipment.

Vietnam is one of the world's top exporters of robusta, widely used in the production of instant coffee.

Meanwhile, trade in rice, another important crop in Vietnam, remained sluggish as harvesting suffered due to persistent rain. Farmers predicted harvesting could start in Vietnam's Mekong Delta rice bowl in January. The harvest in the northern Red River Delta is expected to begin around a month later.