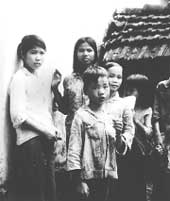 The last battleground of the Vietnam war is still marked by strife. A generation after chasing off the Americans, Vietnam is putting up with what may be called its 'indelible national sacrifice' -- the nightmare of damaged genes. Researchers say there has been a perceptible rise in birth defects and several other reproductive diseases in the past 25 years.

One such victim of the war is Nguyen Ha'lan, who suffers from cerebral palsy which has left her severely handicapped since her birth, both mentally and physically. Her father was a major general in the Vietnamese army during the war where he slogged through one of the most contaminated war zones in the world. Although not precisely measured, sufficient evidence in Vietnam points to a vicious chemical malady, the herbicide Agent Orange, that has bedeviled us war veterans too.

Agent Orange is known to contain dioxin, a chemical listed by toxicologists as one of the most hazardous industrial substances. Vietnamese scientists believe that since mid-1960s, as many as 500,000 children may have been affected by dioxin-related deformities.