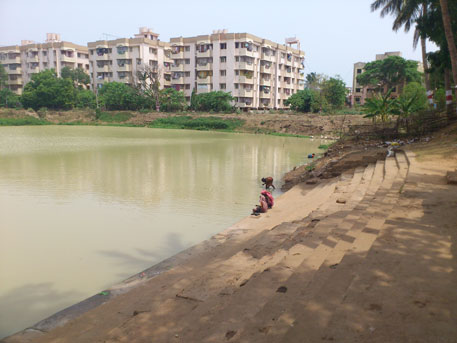 Pramod Kumar Sahu, a resident of an urban village in Bhubaneshwar, has two jobs. He works as a taxi driver, and his other job is to safeguard his village pond or pokhari as it is called in Odiya. Situated at Nayapalli, an urban village, the pond is central to the lives of about 85 households. While some use it for bathing, it is more of a place for recreation and relaxation for village elders and children. The pond also earns revenue through fish farming.

It is one of the few ponds in the capital city of Odisha that have managed to survive the onslaught of urbanisation. The credit goes to a group of 50 men from the village who organised themselves into the village youth club. About two decades ago, when Sahu was in his teens, the men had taken upon themselves to manage the pond, which includes cleaning, manual dredging and vigilance against discharge of household waste.

In return, the residents of Nayapalli allowed them to harvest fish from the pond. Every year they lease the pond to the club members, who get a share of the catch for their own consumption and sell the rest in the market. Sixty per cent of the revenue earned is shared among the club members while the rest goes to the village temple that uses the money for maintenance of the pond and village development. Though the pond water is slightly muddy, Nayapalli residents appreciate the club’s efforts as it prevents any kind of solid waste, not even a plastic bag or a tobacco wrapper, from entering the water body.

At one time, the city used to have 1,000 such water bodies, says P K Dhal, director of BISWA Research and Innovation Centre, a non-profit in Bhubaneswar that works in the area of community development and micro-finance. But with growing urbanisation, most of them have either been filled or encroached, and the city has barely 300 ponds now. Dhal suggests city agencies must engage with local communities to create a more effective mechanism to protect these local water bodies.


The Nayapalli village pond was rejuvenated without any help from the government. Another lake in the city, the Bindusagar pond, presents a sharp contrast. In 2007-2008, a scheme was initiated under the National Lake Conservation Programme to restore the lake located in the old city area and much revered by the people in the city. The lake had turned into a cesspool by the 1990's because of discharge of waste water from the surrounding buildings and throwing of temple offerings and food by devotees, says Sankar Prasad Pani, an environmental lawyer in Bhubaneswar.

The lake revival scheme was supported by the Union Ministry of Environment and Forests (MoEF) and a sum of Rs 6 crore was sanctioned for it under the Jawaharlal Nehru National Urban Renewal Mission (JNNURM). Additional funds were made available by the National River Conservation Directorate of MoEF and the city municipal corporation. Plans were made to divert sewage, set up aeration and bioremediation facilities, remove weed and silt and set up sanitary facilities for pilgrims and visitors. But despite the availability of sufficient funds and an expenditure of Rs 8 crore, the aeration and bioremediation facilities are still not in place and the quality of water in the lake has improved little.