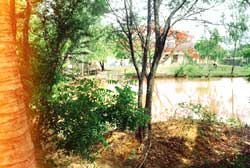 Residents of the Madhanatha puram village on the outskirts of Chennai claim that the groundwater in their area is polluted and is depleting fast. And they blame Siva's Soft Drink Private Ltd, a local soft drinks manufacturing company, which produces two brands of soft drinks -- Fruitnik and Rejoice.

Villagers allege that the company is letting industrial effluents into backyard of the residential colony without proper treatment. A pool of untreated, grimy water stagnates in the backyard leading to several health problems. Residents of Sivaji Nagar, Tiruvengadam Nagar, Santhosh Nagar and Himachal Nagar -- all located near the factory -- are among the most affected. But Y John Christopher, manager of the company, dismisses the problem. He says: "The factory is established in the light industrial area and it abides by all the laws. Besides, the factory came up in 1986-1987 and there were only paddy fields around the factory then. In recent years, villagers have constructed houses in the area behind the factory. The company therefore is not responsible."

A resident of Sivaji Nagar says: "The groundwater is completely polluted due to the effluents released from the factory. Water appears yellowish, and is unfit even for non-potable use. Hence we take recourse to bottled water for drinking and cooking purposes." Even water purifiers don't work. Effluents from the factory, besides polluting the groundwater, also stagnate and act as ideal breeding ground for mosquitoes.

T K Natesan, who is into the real estate business in the village, says: "About 500 houses are affected due to the red coloured effluent which flows through the colony. Ten years ago, water could be found just 1.2m below the ground but now there is no water even at a depth of 6m. Heavy extraction of groundwater by the soft drink's company is the main reason for the depletion of water table." Even the water in the wells is red in colour. But Christopher says that the red colour is due to the iron content in the soil.

Incidentally, the factory is located within the boundary of the Chennai Metropolitan area. According to the Chennai Metropolitan Area Ground water Regulation Act 1987, extraction of groundwater for commercial purposes is banned. Despite several complaints, officials have turned a deaf ear to the problems of the villagers. The company denies all allegations and charges saying, "Only after treating the wastewater, we let them out on the one-and-a-half acre land owned by us".

The Tamil Nadu Pollution Control Board is ignorant of the factory's activities. When contacted, the board said that the factory was registered long ago and they did not have any records of their effluent treatment plant. The factory maintains its stand saying it has an effluent treatment plant as well but does not disclose its location. "We produce 15,000 to 20,000 bottles per day by extracting 40,000 litres of groundwater per day, which is as per the approved limit," says Christopher. But villagers say that production peaks to more than one lakh bottles during summer.

The factory accepts that there is some problem with the quality of wastewater and according to Christopher, the problem will be solved because the factory is being shifted to another village. All formalities excepting some legal clearance have been completed. But villagers are not ready to buy this argument either. According to them, it is a ploy by the company to divert attention whenever the issue is raised collectively.

With increasing pressure from the community, the company is banking on makeshift solutions like open drains but residents want closed drains. The factory has paid the panchayat Rs 1 lakh for the open-drain project but villagers' protests has kept it on hold. The option of shifting to another village may solve problems for the factory but it will take a humungous effort to revive the quality of groundwater -- already gone astray.