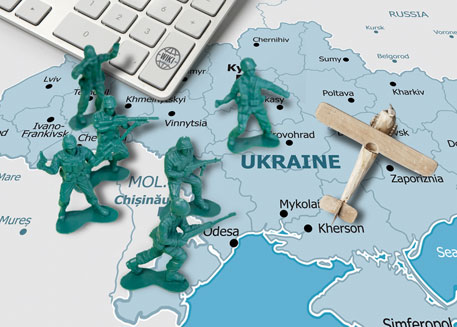 THE INFORMATION war raging alongside military hostilities in Ukraine has hit Wikipedia. Whether it is culpability in the Malaysia Airlines crash, Crimea's legal status or the integrity of Russian state media, government computer users have wrangled over all of these issues via anonymous edits to the collaborative free-access online encyclopedia during Ukraine's standoff with pro-Russian separatists and the Kremlin.

The revisions were exposed in the second week of July, thanks to new Twitter feeds that track anonymous Wikipedia edits made from IP addresses linked to governments in Moscow, Kyiv and Washington. Arguably, the most politically charged of these surreptitious online tussles centred on the July 17 Malaysian airliner crash over rebel-controlled eastern Ukraine that killed all 298 people aboard. The same day, a user with a Ukrainian IP address altered a Russian-language Wikipedia entry on air disasters.

The perpetrators, the anonymous editor alleged, were "terrorists of the self-proclaimed Donetsk People's Republic with Buk missiles systems that the terrorists obtained from the Russian Federation."

The assertion provoked a counter-edit from someone using a computer associated with the Russian state TV holding company VGTRK, which Ukraine and its allies have accused of manipulations and lies in its news coverage of the conflict. Both the edits were subsequently removed.