Can the deadly dengue be controlled by injecting its carrier mosquito with another virus? 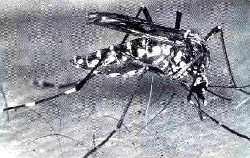 set a thief to catch a thief, goes the saying. In a remarkable molecular biological variant, scientists have made use of one virus to prevent the growth of another. The two under discussion are the sindbis virus (non-specific rna virus that infects insects) and the dengue virus.

Dengue is a debilitating illness that is spread by the bite of a female Aedes mosquito, and is common in tropical countries. The illness is caused by a virus that enters the gut of the mosquito after she ingests blood from an infected human host. After making copies of itself, the virus spreads to other tissues of the insect, including the salivary glands. The next time the mosquito goes in for a blood meal, the virus is transmitted back to infect someone else.Because mosquito-control operations have not been very successful - to say the least - it has become necessary to think of unusual measures to control this and other mosquito-borne diseases.

As demonstrated by K E Olson and colleagues at the Colorado State University in us, a potentially novel strategy of bringing the scourge to its knees is to inactivate the dengue virus by infecting the mosquito with the sindbis virus. This involves genetic manipulation of the sindbis virus so that, in addition to encoding its own genes, it now expresses part of the dengue virus genome (Science, Vol 272).

Crucially, the part that is expressed corresponds to a strand of ribonucleic acid (rna) exactly opposite (the technical term is 'antisense') to the one that encodes an essential dengue virus protein. As a result, in mosquitoes that carry the dengue virus and the genetically modified sindbis virus, both the sense and antisense rna copies of the dengue gene are produced. Somewhat like positive and negative quantities cancelling each other out, the presence of antisense rna prevents the expression of the message in the sense rna. Because of this, the dengue virus is unable to reproduce itself.

Needless to say, there is a long way to go before we can tell whether this advance will translate into an effective means for controlling dengue or will remain an experimental curiosity, a tribute to the skills of genetic engineers. Firstly, a reliable means of manipulating the mosquito genome will need to be devised so as to permit the controlled replication of the anti-viral agent in its body. Secondly, and more importantly, the feasibility and effectiveness of the measure in the real world - outside the laboratory - has to be established.