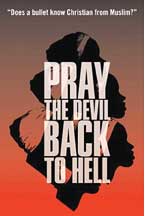 One night, in a country torn by a long and harrowing armed conflict, Liberian social worker Leymah Gbowee dreamt she gathered women together to pray for peace.

Her dream was realized in 2003 at St Peters Lutheran Church in the country's capital Monrovia, when women from all walks of life gathered there to demand peace like Liberia hasn't seen in years.

A new documentary, Pray the Devil Back to Hell, is an in-depth portrait of the courageous women who shaped this movement. Directed by Gini Reticker, and produced by Abigail Disney, the film was chosen as this year's Best Documentary Feature at New York's Tribeca Film Festival.

In the opening scenes, Leymah describes the web of issues that had enmeshed Liberian lives in war. The recollections of the women are placed against the backdrop of terrifying images --bodies being dragged through the streets, children bearing weapons, mass burials, all set to the soundtrack of the steady pop of gunfire. Vaiba Flomo, one of the women, painfully recalls a story she heard in which a woman is forced to sing, clap and dance, while watching her husband being killed and daughter raped.