Waking up livers with foetal cells 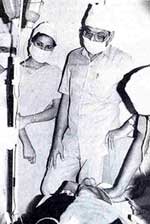 CHITTOOR M Habibullah, principal of Osmania Medical College in Hyderabad, and his team of gastroenterologists have demonstrated, for the first time in India, that liver cells from a human foetus, when injected into a patient suffering from liver failure, can help the liver recover.

Seven patients, whose livers had failed as a result of jaundice, were treated using the new Liver Cell Transfusion Therapy (LCTT). Each patient was given blood-group matched foetal liver cells through a dialysis catheter. Says Habibullah, "Of the seven patients, three recovered in 48 hours, but the other four died."

The liver cells or hepatocytes, which can function in a manner similar to a healthy liver, trigger regeneration in the damaged liver. Each patient requires about 30 to 40 liver cells that have to be extracted from the foetus within two hours of abortion. And because the availability of human foetal cells is limited, the Osmania team has built a small foetal liver cell bank.

The researchers have also had some success using adult dog liver cells, which they injected into other dogs. Efforts have also been made to insert rat liver cells into mice, but Habibullah says dog liver cells are the most promising. "The challenge before us is to develop proper methods to extract and preserve the cells," says Habibullah. "We have made considerable progress in this direction."
In India, about 200,000 people die annually of liver diseases such as viral hepatitis, alcohol-induced cirrhosis and cancer. Liver transplant operations, which can be performed only in a few developed countries, can cost more than Rs 10 lakh. "Fulminant hepatic failure," says Habibullah, "is a potentially reversible disorder. Patients require temporary liver support to recover and LCTT can provide the easiest and most economical option at present."

Given the potential of the project, the Indian Council of Medical Research and the department of biotechnology have provided Rs 50 lakh to set up a liver centre at Osmania hospital.