After being displaced from their natural habitat, bats are taking refuge in abandoned mines, buildings and houses 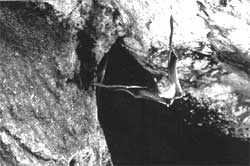 across the us , bats are burned, beaten or buried alive by people who are ignorant of their role in the ecology. Bats eat agricultural and forest pests, and also serve as seed and pollen dispersers. About 70 per cent of tropical fruits in the us market are from plants pollinated by bats. Protection of their habitat is extremely crucial to their survival, and to the overall ecological health.

The us -based Bat Conservation International estimates that one-fourth of bat species across the us have been displaced from their natural habitat in caves, abandoned buildings and on trees in the forests. Bats have taken refuge at abandoned mine sites for hibernation and breeding. However, the microclimate inside the mine plays a critical part in their hibernation. As seen in northern usa , the mines are too cold for rearing young ones, especially as the bats choose mines with large entrances.

In the Adirondack Mountains, New York, a project has helped protect a graphite mine that is a bat hibernation site. This mine site shelters at least six species of bats numbering about 120,000, including the endangered Indiana bat ( Myotis sodalis ) and the Small Footed Bat ( M leibii ). The site was purchased by a conservation group that calls itself The Nature Conservancy ( tnc ). The group decided to install steel gates at the mouth of the cave with the assistance of Roy Powers, an engineering professor and member of the American Cave Conservation Association. He has been designing and building "bat-friendly gates" for the last 20 years. These gates prevent unauthorised entry of people into the mine.

Designing these gates is not simple. Factors like air flow from the entrance and the space between horizontal and vertical bars has to be taken into account to prevent unauthorised human entry, at the same time allowing the bats to get in and out with ease. There are about 10 such gates at the mine site.

Apart from abandoned mine sites, some bats take refuge under bridges. This is because there are lots of insects above the river banks -- the primary food of most North American bats. The bridges also seem to retain heat during the night -- an important requirement for the bats while roosting, digesting food and hibernating. The California Transport Department has also installed bat roosting structures under some bridges. Out of 45 species of bats in the us , six have been designated as endangered and 20 others as species of concern by the federal government.