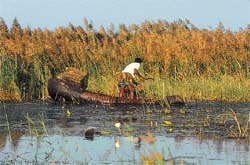 in what is being seen as perhaps the first attempt in the world, a study conducted by the Remote Sensing Applications Area of Space Applications Centre in Ahmedabad, has revealed that 21 wetlands in India are in trouble. All the wetlands documented have been notified as having 'paramount importance' by the government. According to the study, they are undergoing severe threat from encroachment, pollution, aquaculture development and siltation.

Important wetlands of the country, like Kolleru in Andhra Pradesh, Chilka in Orrisa and Nalsarovar in Gujarat have been identified as facing danger by the study. The project was sponsored by the ministry of environment and forests.