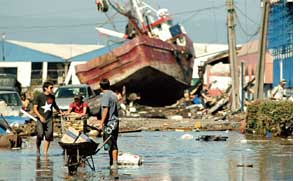 The  Pacific Tsunami Warning Centre in Hawaii blared a warning to countries around the Pacific Ocean on February 27, minutes after the 8.8 quake hit Chile.

ThoUSAnds of people along the coast fled for higher ground. Barring a few islands like the French Polynesia, the 1.2-metre-high waves did not cause major damage.

The region was well prepared or it could have been worse.

Scientists at the warning centre relied on DART ( Deep-ocean Assessment and Reporting of Tsunamis) system, which is the most reliable of all systems. Deep ocean pressure sensors in the system detect a tsunami and transmit signals to warn the population while the killer waves are still offshore.

But due to high installation cost, there are only 47 DART systems, most in the Pacific area. This leaves several countries vulnerable.

A team led by Manoj C Nair at the National Oceanic and Atmospheric Administration in Colorado, USA, has proposed a cheaper way to detect an approaching tsunami— by using the existing and retired network of undersea telecommunication cables.

Seawater is a good conductor of electricity. When it flows through the Earth’s magnetic field, the saltwater gets charged and the movement of positive and negative ions create a weak electric field. The electrical potential diference, or voltage, of the field can be sensed by copper wires surrounding the optical fibres in the undersea telecommunications cables. When a tsunami moves large volumes of water at hundreds of kilometres per hour, it can generate a voltage which can be detected easily.

Researchers had, as early as 1971, figured out such a possibility but studies were lacking on how much voltage a tsunami would produce. “Only recently did we develop the ability for such complex and sophisticated numeric and computer simulations,” Nair said. His team built a 3-D computer model of the 2004 Indian Ocean tsunami and calculated that three cables at the bottom of the Indian Ocean— SAFE ( South Africa Far East), SEA-ME-WE (South-East Asia-Middle East-Western Europe) and Tata cables—could have seen voltages of up to 500 millivolts. “This is very small compared to a 9-volt battery (used in transistors and digital clocks usually), but large enough to be distinguished,” Nair said. The voltage can be detected by voltmeters placed at the end of the undersea cables.

Though the finding does not aim to replace the existing tsunami monitoring system, Nair said, the method would cover areas where sensors are absent. Moreover, it comes cheap.

Future research will investigate ways to subtract background disturbance created by fluctuations in the Earth’s magnetic field, tides and cables to avoid misleading signals, the researchers said in the study published in Earth, Planets and Space in February.