International agencies fall short of funds, claim the crisis is one of the worst they have seen in years 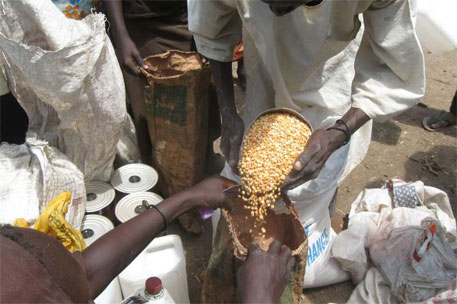 Some four million people are likely to face critical food shortages and a famine may break out in the world’s youngest country South Sudan by next month. This is the warning that has been issued by Britain's Disasters Emergency Committee (DEC), a coalition of 13 major aid agencies.

The country that gained its independence three years ago, after a struggle that lasted about two decades, is still war-torn. "If the conflict in South Sudan continues, and more aid cannot be delivered, then by August it is likely that some localised areas of South Sudan will slip into famine," warned the agency. Poor rainfall and another bad main harvest are likely to worsen the situation.

Thousands have been killed in the conflict in the country, while more than 1.5 million have been forced to flee since the war broke out in mid December. “The number of severely food insecure people increased dramatically to about 3.5 million,” says FAO. The number of people estimated to be in need of humanitarian assistance in Sudan has increased to 5 million.

Adding to the woes of those facing the threat is the United Nations declaration that it has only around 40 per cent of the cash it needs, with a shortfall of over a billion US dollars. Furthermore, the DEC coalition, which includes agencies such as Oxfam, Tearfund and Save the Children "have less than half the money they need to help prevent the growing food crisis in South Sudan turning into a catastrophe," said the organisation chief Saleh Saeed.

Famine, according to UN, implies that at least 20 per cent of households face extreme food shortages, there is acute malnutrition in over 30 per cent of people, and two deaths per 10,000 people every day. “The below-average harvest during the last agricultural season, excessively high prices, and prevailing insecurity conditions in Darfur, South Kordofan, and the Blue Nile, have exacerbated food insecurity in Sudan this year, said the US-based agency Famine Early Warning Systems Network (FEWS NET), in its monthly report for June.

Political tensions fuel crisis
The conflict that originally started as a political dispute between South Sudan President Salva Kiir and his sacked deputy Riek Machar last December, has escalated into ethnic violence and has been marked by widespread atrocities. Despite committing themselves to a ceasefire deal last month, the fighting continues.

Doctors Without Borders (MSF), a medical charity said that the situation was the worst it had seen in years, even during the two decades of war that paved the way for South Sudan's independence. Over 100,000 civilians are crammed inside squalid camps inside UN bases across the country, with numbers continuing to rise. The US-based Fund for Peace think tank last month ranked South Sudan as bottom of its fragile states index, surpassing anarchic Somalia to be worst in the world. This has considerably contributed to the shortage of funds in country