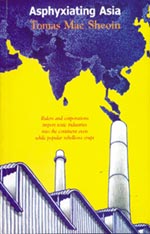 How is the industrialisation of the new 'tiger' economies of Asia different from the western development model? What role did multinational corporations (mncs), nation-states and the local capital play in this? Is such development environmentally, as well as socially, toxic and exploitative? Has it led to a 'popular opposition on a national basis'? These are some of the questions raised by Thomas Mac Sheoin in his book Asphyxiating Asia.

By way of addressing these very concerns, Sheoin has used the growth of the chemical and petrochemical sectors as an example to put forward the 'industrialisation = toxic' logic. An ambitious project, the book includes countries in South Asia as well as North and South East Asia (nea and sea) such as Japan, Taiwan, South Korea, Honk Kong, Singapore, Thailand, Malaysia, Indonesia, China and India. It traces meticulously the industrialization processes in each of these countries, right from the latter half of the twentieth century.

Asphyxiating Asia is concerned with the emergence of the petrochemical industry as a mother industry and a key to 'toxic development.' The regional influence of Japan as the frontrunner for capital and technology is given precedence over that of western and mnc based capital. Sheoin tracks the collapse of the especially less protected sea economies in 1997, and the subsequent entry of the International Monetary Fund (imf) with its conditionalities. He examines the 'dirty underside of the Asian economic miracle'. The new industrialisation of each country and its consequences -- environmental crisis, growth of opposition and a public as well as a state response -- are examined in detail. Various other issues such as the waste trade and the influx of polluting technologies like incinerators are also discussed.

The chapter on India follows the same logic, namely, economic liberalisation of the 1990s leading to new foreign collaborations and investments (less than expected), the growth of the chemical and petrochemical industry (ipcl and Reliance in particular) and the current 'environmental crisis.' The issue of rising industrial pollution and toxics is dealt with thoroughly. It includes details of waste imports and the ongoing activism surrounding it.

The author suggests that the complicity of state control and local capital was pivotal to the industrialization processes, with mncs playing a less important role. The industrialisation project is said to be an alliance between the 'capital and the state' and apparently each is as guilty as any mnc. The emergence of local industry, which later took on the challenge of mncs, also questions the popular belief that there has been a shift of industry from the 'west,' owing to rising environmental standards there. Even though an international trade in hazardous waste is evident it is less important than the issue of locally generated waste.

However, it is in its attempt to draw a unified Asian and geographically isolated regional framework that the author seems less convincing. For example, he states that the 'similarities' in countries are a result of enthusiastic and uncritical promotion of industrialisation by authoritarian regimes. But is it fair to bring a state like India with its diverse and democratic character under such a homogenising sweep, clubbing it with other Asian economies?

The complex and important role of technology is only discussed in terms of 'western solutions'. Technology is not perceived as a condition intrinsic to modernity, creating new power structures and also paving the way for new forms of resistance and knowledge circulation.

The easy division of capital into 'western,' and 'local' categories leaves the interconnectivity of global capital unexplored, and lets mncs off the hook very easily. Contentious debates such as the impact of multinationals pursuing stricter environmental standards, how it compares to a local industry in a wto driven world of global trade, and its implications for environmental degradation and worker conditions have not been explored.

The book does not examine the complex terrains on which global and local environments operate today. It avoids exploring such interconnectivities and instead, lapses into a bipolar analysis.