Hormone replacement therapy after menopause could lower the risk of getting heart diseases, advocates' a new study 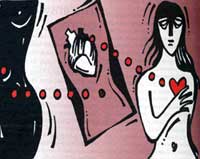 OLDER women can also enjoy good cardiac health if they opt for hormone replacement therapy (HRT) after menopause, because the hormone alters the shape of the body giving the older women more younger and healthier figures. At the recently held European Congress on Obesity in Barcelona, Spain, an Australian endocrinologist produced striking evidence that HRT protects the post- menopausal women from coronary heart diseases by shifting fat from around the waist to other parts of the body where it does less harm.

Katharine Samaras of the Garvan Institute ofMedical Reseach in Sydney, Australia, studied 560 post menopausal women at the Twin Research Unit of St Thomas's Hospital in London, and compared the b6dy fat of women on HRT with those who were not. The women on the therapy had less body fat overall but more importantly, they had nine per cent less fat around their abdomen. Fat around the abdomen is a known risk factor for heart disease. "Our findings suggest that part of the reduction in heart disease risk in women who use oestrogen replacement after menopause may be explained by its a1sociation with lower amounts of central fat," says Samaras. The 'apple-shaped' women, with fat accumulated around the waist have a higher risk of heart disease, diabetes and 'hypertension than the classic 'pear-shaped' women, whose fat tends to gather around the hips and thighs.

Mike Lean, professor of human nutrition at the University of Glasgow said that women on FIRT return to the premenopause shape. He suggested the doctors concerned about patients weigh them to consider the extent of their waistline rather than calculate the body mass index (Bmi), the more usual measure of obesity. BMI is calculated by dividing weight in kilograms by the square of the height in metres. "Many people find it hard to calculate," says Lean. "So why not use the waist? It correlates better than, or at least as well as, anything else with breathlessness, diabetes and bad lipids." He advocates a simple waist measurement scale for gauging a patients risk of heart problems. Women should start keeping an eye on their waist when it reaches 80 cm. Once it reaches 88 cm they should act urgently, he says. The lower and upper figures for men are 94 cm and 102 cm.

According to Kay Tee Khaw, professor of clinical gerontology at the Addenbrooke's Hospital in Cambridge, lipids from fat stores around the waist are mobilised and move into the bloodstream more readily than lipids from other parts of the body, leading to increased levels of low molecular weight lipids. This is the form of cholesterol that is thought to leave deposits, causing narrowing of arteries.

The Medical Reseach Council Of Britain (MRC) has decided to contribute us $31.5 to an international study to establish once and for all the risks and benefits Of HRT. In Britain, 18,000 women will take HRT for 10 years to be followed up for another 10 years. A further 16,000 women from other parts of the world will also participate. The MRc hopes that the results will persuade women that the benefits of HRT - stronger bones and healthier hearts - outweigh slightly increased risk of breast and endometrial cancers (New Scientist, Vol 50, No 2030).