Devours larval and pupal stages of the culprit mosquito 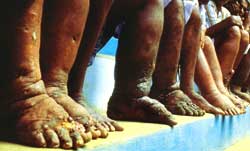 a bug that thrives in bogs, ponds and lakes could help reduce the incidence of filariasis, claims a group of researchers from the Entomology and Wildlife Research Unit of the Calcutta University and the Darjeeling Government College. The insect, Sphaerodema annulatum, preys on the immature stages (larva and pupa) of Culex quinquefasciatus, a mosquito notorious for spreading through its bite the larvae of a worm that causes filariasis.

"The bugs drastically reduced the emergence of adult Culex mosquito in glass aquaria filled with pond water," says Goutam Kumar Saha, who led the research team. "Predation of both larval and pupal stages by the water bug makes it an ideal candidate for use as a biological control agent to decimate the population of Culex adults," adds Saha. The findings of the study were published in a recent issue of Bioresource Technology (Vol 95, No 2).

Filariasis is a major health concern in India. Insecticides used to kill disease-carrying mosquitoes are potential environmental threats. To find out an environment friendly control agent, the Kolkata team explored the role of the water bug, which is found in the same habitat as the Culex mosquitoes. Adult bugs, taken from the Rabindra Sarovar in Kolkata, were kept in an aquarium filled with pond water and fed for one week. The bugs were starved for 24 hours before being used in the experiments.

The scientists took ten aquaria filled with pond water. Five aquaria, each containing 300 larvae of the Culex mosquitoes and an adult water bug, were used for the experiments. The rest five were treated as control sets and only contained 300 larvae each. The water temperature ranged between 18 c and 22 c. On the first day, the adult water bugs consumed on an average 89.6 larvae. In control sets, no larvae and pupae died. During the entire study period, the bugs killed on an average 65.17 larvae per day.