Water managers remain lukewarm to use of information communication technology

For mass use, any ICT tool has to offer a familiar interface and clear value proposition 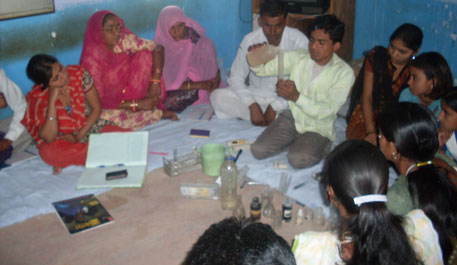 Information communication technology (ICT) has long been touted as the ultimate force multiplier of development by speeding up data collection and analysis. Those working in the water sector have been tardy in using ICTs, but that is not for the want of technological options. There are dozens of packages that combine visual information with data and are great for decision making, monitoring and service delivery in water. Some duplicate each other while others occupy niches.

ICT tools have been around for several years, but most have remained confined to a few pockets. Neerjaal is one which originated from the Global Rainwater Harvesting Collective or the Barefoot College, Tilonia, Rajasthan. The idea is to have a web interface in English and Hindi to collect and display information. Its use is currently limited to the Silora block of Ajmer district and it has information on water quality and quantity. The idea has not expanded beyond this because of a lack of funds to support further development, says Neerjaal's developer Osama Manzar. He plans to make the system available on Android phone if he can raise the money for development. Field Level Operations Watch or FLOW offers more flexibility than Neerjaal since a user can develop a survey on the fly and geotag the information.

A similar system is the Water Point Mapper developed by WaterAid for its work in Africa. This does what it says – generates maps of water points and their condition, based on Google Earth or other maps. It is meant to support planning and improve accountability. It can also indicate a community’s access to water, the distance to the nearest source, water quality and help in monitoring. It can graphically show spreadsheet data and is fairly simple to use. But here again, uptake in India has been poor largely because people do not know of its existence and poor Internet access from field locations.

One of the biggest problems has been the accuracy of data being fed into a system. While FLOW captures the data entry operator’s identity, most other systems do not. This has been a big issue with the quality of data on the websites of the Rajiv Gandhi National Rural Drinking Water Mission and Nirmal Bharat Abhiyan. The spread of the data is impressive; for example, the drinking water mission’s website provides data on the number of water schemes in each habitation by type and quality-affected habitations. The concern, according to the officials of the Ministry of Drinking Water and Sanitation, has been validating the data.

There are several other data systems for water. The Stockholm Environment Institute's US Centre developed the Water Evaluation and Planning system, or WEAP, a tool for integrated water resources planning. The Watershed Management System, developed by the Geomatics Division of the National Informatics Centre, Bhopal, uses both GIS and remote sensing to create a spatial database on soils, land use, contours, geology and drainage, using topographical maps from the Survey of India. Micro Technologies India has developed Mapper as a self-learning mapping tool kit. The Integrated Water Resource Information System (IWRIS) is a data management tool for water resources data. The Centre for Good Governance in Hyderabad has developed a web-based system comprising of a water supply database at the sub-block offices of the public health department. None has been widely used.

A relatively new entrant to this in India is FLOW, developed by Waterforpeople and Akvo Foundation as a monitoring tool. This system collects, manages, analyses and displays geographically-referenced data in real time. Waterforpeople is using this to map water points in the Shivgar district of Bihar as part of a demonstration project with the state’s Public Health Engineering Department (PHED). It has also used it for baseline data collection in four districts of Bengal.

FLOW runs on Android phones and devices. An organization can generate customized surveys and field surveyors can collect and upload information using a phone. The information is displayed on Google Maps. The catch is the cost. At Rs 5.3 lakh per instance and Rs 1.8 lakh per year to cover technical and operating costs, entry and use is steep for Indian NGOs. But, says Amitangshu Acharya, Akvo’s consultant in India, this allows users to set up and run up to 50,000 surveys a year, the results of which are instantly available via a control panel. FLOW is currently operable in English, but there are plans to make a Hindi interface available.

Mobiles are already being used in complaint systems in Madhya Pradesh, Bihar and Bengal. A user sends a text message to a predetermined number about a dysfunctional hand pump that is copied to the PHED. The server directs the message to the nearest trained hand pump mechanic who fixes the problem and texts back that the job is done. This is the only mass use of communications for improving service delivery. The reason it has worked, according to the executive director of Waterforpeople, Arumugam Kalimuthu, is because it is simple and serves a direct need and uses familiar technology. 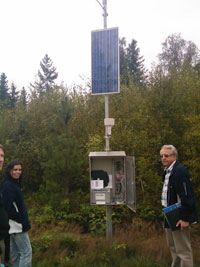 The common complaint from the developers is the lack of interest from the water sector. Their perception, as voiced by ICT consultant Megha Phansalkar, is that ICTs are the preserve of a few; its use is individual-driven rather than institutionalised. There is little use of technology except in monitoring and even here, it has not been scaled up beyond a few villages. The water sector is dominated by the government that sees technology as useful for monitoring, but not for transparency or better service delivery.

This points to two things. One, that the ICT sector presumes too much while developing software without understanding what the user wants. Systems using maps and large spreadsheets are hard to understand and use except for the technologically-savvy. Yogesh Jadeja of Arid Communities and Technologies, Bhuj, uses printed maps as a planning tool, and has a trained a computer operator to feed data; it is not, he feels, simple enough for anybody to do. For mass use, any ICT tool has to offer a familiar interface and clear value proposition.

Second, people in the water sector are more comfortable not using technology in their work, regardless of the arguments for efficiency. Another reason, according to the head of Indiawaterportal.org Deepak Menon, is ICTs have not made the last-mile connection; they are unusable at the field level by field staff. It is tough to send a message in an Indian language using a mobile keypad. It is also tough to persuade people to collect and share information unless it directly affects them, like in the case of hand pumps. People are not interested in providing information that can be fed into a map, unless there is an obvious payback. Those who are, run into dubious digital literacy of their superiors, who are unable to use digital information and force them back to pen and paper. They seem unconvinced by the argument of long-term cost effectiveness of ICTs for development. ICTs and water remain as unmixable as oil and water, intersecting in colourful patterns but remaining distinct.
Web Specials Web Specials Web Specials Yogesh Jadeja Watershed Management … Waterforpeople WaterAid Water Point Mapper Water Management Water Evaluation and … Osama Manzar Neerjaal Integrated Water … Information … Indiawaterportal.org Global Rainwater … Field Level … Down to earth Deepak Menon Arid Communities and … Amitangshu Acharya Akvo Foundation
SUPPORT US