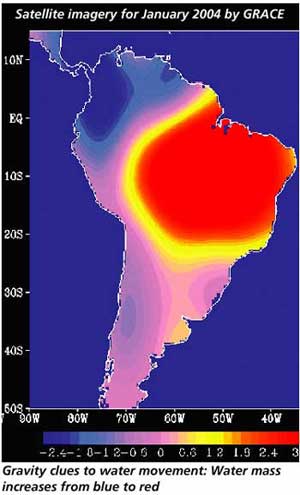 using gadgets available on three satellites, scientists at the us National Aeronautics and Space Administration (nasa) have measured the complete water cycle of an entire continent -- South America -- for the first time.

A deep understanding of the processes transporting water from the oceans to continents is vital for climate and ecology studies. Besides helping manage floods and droughts better, such knowledge helps quantify freshwater resources available for agriculture and monitor surface and groundwater quality, the scientists from nasa's Jet Propulsion Laboratory say in a paper published in Geophysical Research Letters (Vol 33, No 8). At present, such continental-level water budget studies are restricted to computer simulations using ground-based measurements available from different countries.
Team leader Timothy Liu says South America was chosen because it is completely surrounded by oceans. "This helps us compute the total water transported through the atmosphere across the coastline into the continent," he said. They could have chosen the Indian subcontinent, but measuring the water transported to the north across the Himalaya was difficult. Also, there is no accurate estimate of water discharged through Indian rivers into the oceans.

grace is a mission to measure the earth's gravity field, which varies from place to place largely due to the movement of water. Hence, it allows scientists to measure the quantity of water moving from one area to another.

They also used data from river flow gauges together with projections from models that predict the amount of water discharged at the mouths of rivers. The river discharge rates were collected over periods ranging from a few years to a century, depending on the river basin and locality, and were averaged to determine an annual cycle. Scientists compared that estimate with the monthly changes in South America's water mass over two annual cycles, from August 2002 to July 2004, as measured by grace. This data from grace was further calibrated by comparing it with annual variations of rainfall in the Amazon and La Plata basins -- the two largest drainage basins in South America.