Water supply is all

What about the sewage that makes Kovalam beach stink? 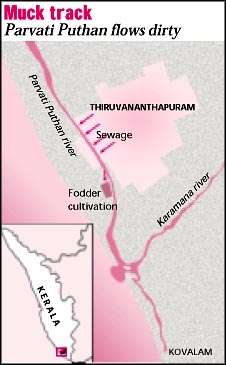 In October 2003, the managers of Kovalam beach near Thiruvananthapuram, Kerala, conceived a plan to create a zero-waste, eco-friendly beach. They targeted the waste tourists dump on the sands; that hasn't cleaned the beach up. The real problem lies -- or rather, flows from -- elsewhere: the mass of smelly and black sewage Kovalam receives from the Parvati Puthan river; almost all of Thiruvananthapuram's muck. But ask authorities in the state capital how they are managing their water, and they will point supply-side: the fact that Parvati Puthan has turned into a sewage drain completely escapes their managerial gaze.

To know how Parvati Puthan was turned into a sewage drain, we have to go back to 1938 and to Thiruvananthapuram. The state capital that year set up a treatment system called the Comprehensive Sewage Scheme, designed to use Parvati Puthan as a sewage-conveying channel. An important component of the system was a stretch of open land to which the sewage was diverted, to be then used to cultivate fodder. In 1938, Thiruvananthapuram's population was about one lakh and the sewage outflow 16 mld (million litres per day), so the cultivation patch was able to absorb the muck.

But Thiruvananthapuram's population is now approximately 789,000 and Parvati Puthan carries over 150 mld of untreated sewage every day. Yet the fodder cultivation patch -- it no longer exists outside city limits; the airport has come up near it -- is still the Kerala Water Authority's (kwa) only answer to sewage treatment. kwa, which manages the city's water supply and sewage, claims it takes care of all the city's sewage.

Indeed, nothing's changed over time. kwa has the same old seven sewage blocks in the city. Each block pumps untreated water into Parvati Puthan, which then flows in an 8-km open channel through the city. All the way down to Kovalam and the sea. Its ironical that although Thiruvananthapuram in 1928 became one of the first cities in India to have piped water, it is yet to have a sewage treatment plant. The sewage in Parvati Puthan has become a major health hazard. According to John Kurien, a fellow at the Centre for Development Studies in Thiruvananthapuram and an expert on fisheries and oceans, a large part of the coast south of the city is highly polluted. The sea at Kovalam is polluted till 500 metres, and skin diseases are common among people who swim there.

Moreover, Viji Titus, executive engineer at kwa's sewage department, says 40 per cent of Thiruvananthapuram is connected to the sewage system. This doesn't match figures given in the State Planning Board's Economic Review 2003. According to this document, 83.36 per cent of the city's urban population gets piped water, but only 23 per cent of the households have access to a common sewage collection system. The remaining households have septic tanks or soak pits, which contaminate open wells.

Yet the city's focus since the 1930s has been to get more and water through expensive supply schemes. The kwa currently runs the Rs 4.24 crore Aruvikkara scheme and the Rs 10.48 crore Peppara Dam scheme, both of which use water from the Karamana river (see map: muck track). Next on the pipeline is a Rs 215.12 crore project at the Karamana for which the Japan Banking International Cooperation will lend Rs 199.47 crore.