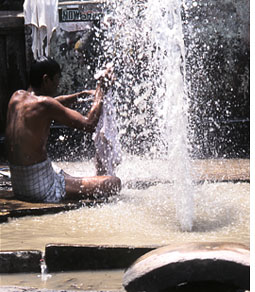 come May, water may no longer be free for Kolkata residents. The city has decided to levy a water tax. "The idea is to recover the operation and maintenance costs of supplying water," says B K Maity, chief engineer at Kolkata Municipal Corporation's (kmc) water supplies department. The tax is expected to be a nominal amount and bpl families will be exempted from paying it.

Maity says though the city charged water tax for commercial use, it did not have a separate water tax for residential use. There used to be a "nominal water fee" for domestic use, which used to be appended to the individual property tax bill that residents paid on a quarterly basis. However, the city government discontinued the fee in 2002-03.

The new tax structure will be based on a model designed by city economist Jayasree Roy. "We conducted a broad household survey in all 141 wards and came up with the payment structure," says Roy, who teaches at Jadavpur University and has been researching the economics of water use since 2000.

The tax structure will be based on volumetric use. Roy's research found 65 litres per capita per day was the subsistence-level need and recommended that this be supplied free of charge. kmc has decided that the first 1,000 litres used per day will be free for a family of five. For use amounting to 8,000-10,000 litres a day, Rs 10-12 will be charged per thousand litres. The rate will increase to Rs 25 per thousand litres if consumption is from 12,000-17,000 litres a day. The finalized tax structure will be announced during Kolkata's 2008-09 civic budget.

Initially, during the "testing phase" kmc will charge a flat rate of about Rs 150 a month, says Roy. It will set up registration camps for three months beginning March, inviting residents to register their names for water meters. kmc will then install about 100,000 water meters, obtained from the Asian Development Bank, in homes on a first-come-first-serve basis. Those who fail to register at the camps will have to continue paying the flat rate tax, which is slated to increase by 20 per cent every year.

It will take at least three to four years to install the meters in the estimated 260,000 homes, says Maity, and possibly even longer to monitor water consumption in the households. The tax proposal is being opposed by the Forward Bloc, one of the ruling Left Front parties that formed the kmc board. "Tax the upper class and commercial users. Leave slum-dwellers and the middle class," says kmc member Subodh Kumar De.