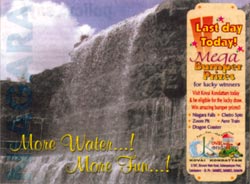 But not a drop to drink. The heat wave has already killed more than a thousand people all over India. Taps in major metros are running dry. Water bodies are evaporating. Groundwater supplies are running low. At a time like this, who wouldn't fall for a newspaper ad that promises the Niagara Falls, to just about anyone.

An amusement park in Coimbatore has been urging its readers, through its advertisements in a major south Indian English daily, to visit its premises. Among the amusements on offer are the Niagara Falls. The advertisement, titled "More water, more fun", shows an impressive-looking giant faux waterfall, overflowing with water. Wonder where this water is coming from? What this obviously means is, somewhere, some village woman has to walk an extra few kilometres for her daily supply of water. Not much fun for her.