Day Zero is meant to cut Cape Town's water use: what is it, and is it working? 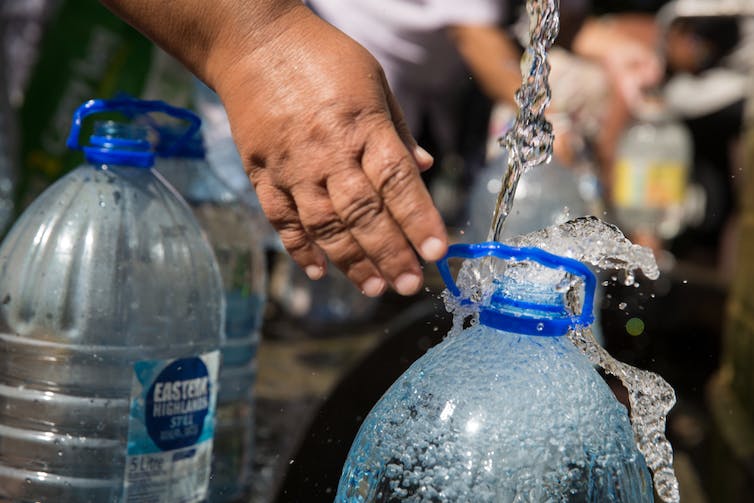 If Cape Town reaches Day Zero, taps will be closed and people will have to go to collection points for 25 litres of water. Shutterstock

The City of Cape Town has introduced the idea of Day Zero to focus everyone’s attention on managing water consumption as tightly as possible by cajoling water consumers into reducing usage. Day Zero is when most of the city’s taps will be switched off – literally.

The consequences of reaching this point will be far reaching. For one, it will mean residents will have to stand in line to collect 25 litres of water per person per day. The water will be sourced from the remaining supplies that are left in the dams.

Day Zero isn’t a fixed target. The city moved it out from April 12 to July 9. The reason for this is that a number of factors affect the date. These include how much residents are reducing their demand. There are already signs that water users are saving more. The goal is to achieve an average daily demand of less than 450 million litres which equates to about 50 litres per person per day. The city isn’t there yet, but for the first time figures are consistently closer to 500 million litre per day.

The City of Cape Town describes Day Zero as the point at which the Disaster Risk Management Centre introduces phase 2 of its plan. Phase 2 will be triggered when the city’s big six dams supplying Cape Town reach a storage level of 13.5%. This leaves just enough water to supply critical services. This will include sufficient water to distribute to collection sites across the city.

Day Zero is being used in a desperate bid to avoid the final crisis stage – Phase 3 – when there is no longer any surface water available to supply the city. At that point, bottled water that’s been collected from groundwater, springs, and from whatever desalination plants can contribute will be distributed. Phase 3 will mark the point of complete failure.

What happens on Day Zero

Day Zero will be the start of active water rationing. As far as possible, drinking water will continue to be supplied to some critical areas. These will include strategic commercial areas, high-density areas with significant risk of increased waterborne disease such as informal settlements, and critical services like hospitals.

But water will be cut off to residential taps and large numbers of households and businesses will be unable to access drinking water in their homes and places of work. People will be forced to go to collection sites across the city to fetch water.

Meanwhile, city authorities intend to maintain sewerage systems with minimal flow by injecting water into the pipelines. It also means that a portion of water collected from the distribution points will have to be used, for example, to flush toilets.

In Phase 2 the plan is to roll out distribution points across the city. This will be impractical and hugely challenging at the very least. Site selection is unlikely to be evenly distributed across the city because distribution sites will depend on existing water pipelines.

Cape Town is using a relatively simple model to manage water in an effort to move circumstances from a critical zone, and potential failure, to a position where the risk of running out of water is greatly reduced.

Each week the city updates its model to show progress in avoiding Day Zero.

Tough water restrictions, plus punitive tariffs, will drive down water demand, helping to postpone Day Zero – or even leading to it being cancelled. Reduced demand is one way of postponing Day Zero. But there are other factors too.

The agricultural sector is already using 60% less water than what’s usually allocated to it. Some irrigation boards have closed off their water supply and farmers are reducing the amount they draw from the Western Cape Water Supply System.

Another factor is rainfall. But that’s unpredictable. In April 2005 a thunderstorm broke the drought and provided some relief.

A final factor is that new projects will also bring additional water from tapping into the aquifers and from desalination.

There are some painful months ahead for Capetonians. For now, Day Zero remains a useful tool in the sense that it’s a target to be avoided.

There are encouraging signs suggesting that the city will get through this difficult period. For now, the city’s water risk model is showing how Day Zero is being managed. This is creating greater trust and confidence in the technical capacity of water managers along with the collective public and private efforts to reduce demand and avoid disaster.

Day Zero is not, as some have suggested, a hoax. It is a vital concept that is helping to strengthen the city’s ability in managing the water crisis.