Thirsty by the river 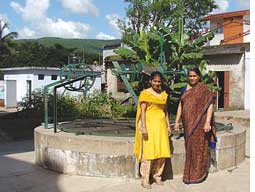 MANGO, a fast-growing suburb of Jamshedpur, is facing an acute water crisis despite being near the river Subarnarekha and Dimna lake. Following public protests, the Jharkhand Public Health and Engineering Department re-sent a proposal for a drinking water project to the state urban department in the end of October.

While 200,000 residents of Mango have to make do with a system designed to supply water to 30,000 people, the Rs 50-crore project to bring water from the Subarnarekha has been gathering dust for three years, with the state government citing cost overruns.

Public anger has been brewing for some time in the area. In April this year, people tied two water supply officials to pillars for allegedly selling water to private tankers when the residents had not been getting water for days. On September 22, about 250,000 residents of Mango staged a sit-in in front of the East Singhbhum District Collectorate office, protesting water shortage.

Water supply in the area is 1-1.2 million gallons per day against a demand of six million gallons per day. Erratic power supply and poorly maintained infrastructure hamper distribution. Gope Devi, who lives in a slum in Azadnagar, said the poor in his area are forced to collect water leaking from pipes. Syed Firoz Ali of Kabir Nagar complained that his area gets water for two hours once in three or four days.

Erratic supply has forced people to sink bore wells. But the geology of the area is such that these run dry in three to four years. Underlying hard rocks and absence of primary aquifers--rocks that have the inherent capacity to hold water--make natural recharge of groundwater very difficult. The incline of the region lets rainwater flow down to the river before reaching the cracks in the rocks.

But the government has not limited or banned the use of groundwater in the area. Mango is witnessing a real estate boom and according to Kerala Public School principal Vijayam Kartha, builders are recklessly exploiting the groundwater. Even the quality of water is poor. The bore well water is hard and the supplied water dirty because it does not go through filtration.

The way out
The Kerala Public School in Jawahar Nagar, however, bucks the trend. It installed a rainwater harvesting system on its premises in 2005. Today, its wells do not run dry even during peak summers. Kartha said the school harvests about 240,000 litres of water on its 250 square metre roof. The harvested water recharges the groundwater through an open well in the area. People in neighbouring areas no more complain about their bore wells going dry in summers, said Mousumi Roy, in charge of the school's Ecoclub. Kalpana Mitra who lives close to the school said her bore well has enough water even in April and May. The school won the Green School Award given by the Delhi-based Centre for Science and Environment.

The Jamshedpur Utilities and Services Company boasts Jamshedpur is probably the only city in India that has 24-hour supply of drinking water and electricity. Mango does not have to be a poor neighbour if its residents and the East Singhbhum municipality follow the Kerala Public School's example.