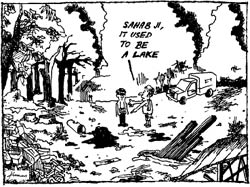 one of the most dramatic conflicts over land use ended with the Gujarat High Court (hc) delivering the final judgement in the Ahmedabad lakes case. The hc has directed the government authorities, which had actively contributed to the destruction of the city's waterbodies, to protect and recharge them. However, the restriction on building activity around lakes, which had brought builders to their knees, has been lifted. The judgement was delivered in August on a group of public interest petitions demanding revival of the city's lakes (see Down To Earth ; Vol 11, No 3, June 30, 2002).

The conflict had produced several remarkable interim orders. Most notable was the restriction imposed on April 18, 2001, which prohibited all construction within 500 metres of lakes smaller than 5,000 square metres and one kilometre of the bigger waterbodies.

Aimed at preventing further degradation of the lakes' catchments, the order brought construction activity to a virtual standstill in the city for more than a year. The interim order was passed by a two-judge bench comprising Justice B C Patel, recently elevated to the Jammu and Kashmir High Court as the chief justice, and Justice D A Mehta.

The curbs on building activity resulted from the court taking a strong view of the authorities' lack of interest in the city's waterbodies. Much to the annoyance of builders and government authorities, the order halted construction in 70-90 per cent of the city's land area. Consequently a large number of builders had approached the court seeking revision of its previous order.

The final judgement, delivered by Justice D A Mehta and Justice R K Abhichandani, who replaced Justice Patel says: "The question of determining the peripheral area surrounding a lake or pond on which construction may be prohibited will be taken up by the concerned authorities...." Earlier in May 2002, the Ahmedabad Urban Development Authority had notified the General Development Control Regulations, permitting construction nine metres from the waterbodies.

The final order also notes: "The interim orders made in these petitions have, however, goaded them (the authorities) into some action and the final responses on behalf of the state government, the urban development authorities and the municipal corporation have raised a distinct ray of hope that may in the near future glitter on the surface waters of the waterbodies that are promised to be reinforced and preserved."

But recent reports in the media paint a bleak picture. In a report entitled 'Rape of the Vastrapur lake', The Times of India reported the following: "In stark violation of the Gujarat hc's judgement and state government's assurance to the court to protect lakes, Vastrapur gram panchayat continues to dump garbage in the lake. The locals have even started burying their dead in the lake bed. When contacted, officials of the Ahmedabad Urban Development Authority, district collectorate and Vastrapur gram panchayat passed the buck blaming each other for the condition of the lake."

"This is indeed shocking," says Mayur Pandya, a lawyer who has handled environmental cases in the hc, adding: "However, the court cannot monitor the implementation all along and effective execution depends upon the commitment of the authorities concerned." Pandya was appointed the chairperson of a five-member committee set up by the court on April 5, 2002, to advise it on the matter.

The court has asked the authorities to notify all lakes of the state in the official gazette and has cautioned against conversion of the existing waterbodies for any other purpose. It has also asked the government to undertake urgent measures for checking pollution, rejuvenating the lakes and using them for recharging groundwater. In addition to this, the administration has been asked to remove encroachments around the waterbodies. The order directs the state government to create a Water Resources Council, headed by the chief minister, as laid out in the state's draft water policy. The council will be assisted by a Water Resources Committee, chaired by the state's chief secretary.

But there are those who feel that the entire exercise taken up in the past year or so has been wasted. "Knowing the way the Gujarat government functions, there is no guarantee that these directions would be followed," says R O Shah of Baroda Beautiful Council, a non-governmental organisation working for the protection of waterbodies in Vadodara. Shah's views are shared by Sandeep Brahmbhatt, an animal rights activist who had filed a petition in the high court for the protection of a waterbody in Kalol near Ahmedabad. He says, "Leaving the entire responsibility with the state authorities can lead to corruption. The government is always under pressure from the builders' lobby." The builders on their part are satisfied. "Since the past one year, building industry has lost crores of rupees. Now that the order is lifted, business will pick up again," says Bimesh Patel, president of the Gujarat Institute of Housing and Estate Development. It is also felt that the minimum radial distance for construction is a major cause for concern. "As all civic authorities have their own set of regulations, this can be stretched to any limit," says Pandya.

However, there are legal experts who point out that the court has done all that is within its jurisdiction and that it cannot be expected to take over the role of the implementing agencies. "The court has laid down the grid for the government to walk on. And now it is up to the government to decide whether to follow this. This judgment can be used to initiate action against the executive if it fails to comply," explains a legal expert. Sure enough, battle lines remain drawn. "If the authorities fail to follow the directives, we would seek contempt proceedings against them," promises Shah.