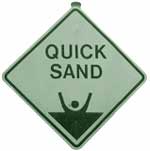 dry sand can be as treacherous a deathtrap as quicksand, according to a team of scientists at the University of Twente in the Netherlands (Nature Vol 432, No 7018).

The scientists blew air through little holes in a plate at the bottom of a plexiglass column of sand about 60 centimetres (cm) high and 20 cm wide and deep. After the airflow stopped, 59 per cent of the total volume of the container was found to be air and the rest sand. The arrangement was akin to a house of cards. Says assistant professor Devraj van der Meer, "A (solid) ball weighing about 130 grammes will sink in by about five time its diameter in this sand." Even a weighed-down table tennis ball was sucked in by the sand. The findings could explain reports of travellers being swallowed up in the desert.

Not all kinds of sand are potentially so dangerous. For instance, the sand van der Meer and his colleagues used was very dry and fine. "The sand is just 40 microns (1 micron is a thousandth of a millimetre) in diameter, so that's close to the width of a hair," says Raymond Bergmann, one of the researchers. The idea behind the research is to understand the forces at play in a type of sand that behaves almost like a fluid.