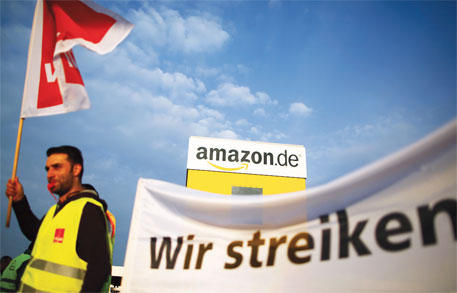 Employees of Amazon in Germany have staged their first ever strike to put pressure on the global Internet retailer to improve pay. More than 1,000 workers walked off their jobs on May 14 at distribution warehouses in Bad Hersfeld and Leipzig, said the services employees’ union ver.di. The union is demanding that Amazon’s 9,000 employees in Germany be paid according to a sector-wide wage deal for the retail and mail-order industries, rather than Amazon’s own pay scale.

The head of Amazon Germany, Ralf Kleber, rejected these demands, arguing the retailer’s staff was working in the logistics business, packing and dispatching parcels, rather than in the retail and mail- order sector.