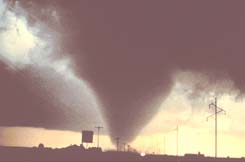 ever since humans learnt to walk upright, they have made a conscious effort to gain control over all the things that affect them. From domesticating wild beasts millions of years ago, to decoding the complexities of the human genome this century, an insatiable urge to play God has always facinated humans. Yet the one thing that has still not been clearly understood, let alone be tamed, is Nature. Every time humans thought they had deciphered nature's ways, it has, in its myriad manifestations, come up with even greater challenges, more furious than ever. No wonder ancient civilizations worshipped the power of nature, building temples to appease the elements and more or less submitting in reverence.

One school of scientists, however, has not given up searching for ways to tame this 'beast'. They are known as the 'weather makers' -- people who have dabbled in cloud seeding to make rain, in hurricane mitigation and in various other means of making weather obey orders. Such research is no doubt expensive and for that very reason only few countries -- and that too only the developed ones -- are known to have started programmes to research what is called weather modification ( wm ). And more often than not, it is the armed forces that have been given the prerogative to conduct such research.

However, like most military operations, a veil of secrecy envelopes the wm research also. Perhaps the only give away was the us Air Force-sponsored project called Stormfury, which attempted active intervention in severe weather in 1983. Stormfury tried killing hurricanes by extensive cloud seeding of their walls using sophisticated airborne equipment but was discontinued as it proved not feasible It is claimed that hurricane Debbie, which struck the us between August 18-20 in 1969, was seeded as a part of Project Stormfury where heavy doses of silver-oxide were dropped into the hurricane clouds. The maximum measured wind speeds in the hurricane dropped by 31 to 15 per cent on the two seeded days. But on the 19th, the day between the two flights, the storm reportedly intensified.

For a while the world was fooled into believing that only mad scientists thought of handling Nature. But in 1976 when the United Nations General Assembly adopted a resolution prohibiting the hostile use of environmental modification techniques, the realisation that wm was indeed possible dawned upon people across the globe.

That was 24 years ago and still not a single country is prepared to accept that it knows how to carry out wm , let alone the fact that some of them have actual facilities to do so. However, one scientist has taken the brave step, at an overbearing risk of being laughed out of business, to come up with a such a theory. Bernard J Eastlund who spent eight years managing research programmes for controlled thermonuclear research for the us atomic energy commission and holds various patents for wm technologies, has come up with a theory that just might tame tornadoes. According to Eastlund, tornadoes are formed during violent thunderstorms when warm humid air rises from the Earth's surface through an upper layer of cooler air, cooling down as it rushes through. As the air cools, its moisture gets condensed and now cold and heavy with rain this air once again falls down wrapping itself up until it forms into a tornado.

However, all thunderstorms do not give rise to tornadoes and for a 'mesocyclone' as Eastlund prefers to call them, to be transformed into a raging tornado, downward motion of columns of rain need to transfer a portion of their energy into rotational motion, which is partly influenced by the Earth's rotation. It is this downward draft of cold moisture laden air that Eastlund proposes to blast. A beam of microwaves could heat up this rainy column and disrupt the transfer of energy, thus killing the possibility of any tornado being formed. The beam of electromagnetic radiation could also absorb the rain that forms a part in formation of tornadoes in a mesocyclone.

One way to achieve this is through solar power satellites. A billion watts of energy reflected from the solar panels could be quite adequate. However, this would require accurate numerical modelling and data that would then have to be analysed and fed into an array of satellites in geosynchronous (aligned to the Earth's rotation) orbit over the affected area which would then zap the rain column using a specially tuned microwave pulse beam.

In order to prove his theory, Eastlund took the help of some scientists at the Centre for Analysis and Prediction of Storms at the University of Oklahoma, usa . "We used the Advanced Regional Prediction System ( arps ) to carry out some numerical simulations in which a mesocyclone is heated with microwaves. The tornado forming region was completely eliminated in these simulations," an enthusiastic Eastlund told Down To Earth (see interview). The Thunderstorm Solar Power Satellite concept focuses on smaller storm systems and on the fine structure of such systems in the hope of identifying lower energy and power requirements for mitigation. "I believe the principal has been established and once the scientific community turns its attention, without fear to the science of weather modification, other methods would be found for favourably controlling weather," he adds.