Weekend off for heat 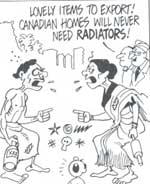 HUMAN activity makes Madras city 10 C hotter than its suburbs, according to researcher N Jayanthi of the Regional Meteorology Centre there. In a paper presented at the recent national symposium in New Delhi on meteorology and national development, Jayanthi says the city is also hotter by 0.50 C to 0.90 C during the week than during the weekend, when there is less human activity.

But relative humidity, on the other hand, is lower on weekdays than during the weekend by as much as 5-7 per cent, her research shows. The weekend-weekday differences, Jayanthi adds, are more pronounced in the city's coastal belt and high-density commercial pockets than in other areas.