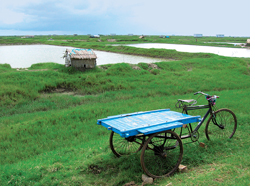 a flat, 21 km strip of land in the middle of the Haldi river, three metres above sea level and accessible only by motorised boats, is the West Bengal government's alternative to Nandigram for a chemical hub. The state cabinet on September 17 endorsed a plan to locate the Indonesia-based Salim group's chemical complex on the strip of land, called Nayachar (new sandbank). The proposal, first aired in early September, stands mired in controversy.

The land bar (geologists say Nayachar doesn't qualify for island status) lies about three km east of Haldia in East Midnapore district and 11 km from Nandigram. The Nandigram proposal had to be shelved in March after police fired on villagers protesting acquisition of their farmland, killing at least 14.

State officials say the new site is feasible because the government has around 4,450 hectares (ha) at Nayachar, while the project requires around 4,045 ha.The state, however, hasn't discussed rehabilitation of 3,000 fisherfolk living there (see box Local lifestyle). Mostly squatters, though some were moved there by the government in the 1980s to promote fishing, these people have no legal rights over the land. Residents like Kajal Guri and her family who have been living in a tiny mud hut by the riverbank for 19 years hope they'll get jobs in the factories that they hear will raze their homes. "We have nowhere to go from here," she says.

The chemical hub is to be a 5050 joint venture between the New Kolkata International Development, a company promoted by the Salim group, and the West Bengal Industrial Development Corporation. The state wants to make the hub part of a petroleum, chemical, petrochemical investment region that would include existing petrochemical plants such as hpl, Mitsubishi and South Asian Petrochem in Haldia. Nayachar will be connected to the petrochemical hub, Haldia, by a bridge. It is expected the region will attract investments worth Rs 440 billion. The state will now send a proposal to the centre for approval.
Nayachar falls under the core area of Coastal Regulation Zone-i (crz-i). "It is a no development zone, as per a 1991 Union ministry of environment and forests notification," says Sugata Hazra of the School of Oceanographic Studies at Kolkata's Jadavpur University. The notification specifies that coastal stretches influenced by tidal actions of up to 500 m from the high tide line are to be treated as crzs. The centre has banned industries in such zones except those directly linked to the waterfront. For the chemical hub to come through, the ministry would have to give special permission to the state, Hazra says.

The feasibility of building heavy structures on what the Geological Survey of India (gsi) describes as "soft", "young" land vulnerable to earthquakes, cyclones and tsunamis, is also being questioned. The Kolkata Port Trust records trace Nayachar's formation to the 1930s. Though the land mass is growing, the rate of erosion is high, hence the land is not stable, says Hazra.

A detailed study of the hydrodynamics of the Nayachar region is imperative before the project gets the go-ahead, says Ashok Bhattacharya of the marine sciences department at Calcutta University. "Nayachar isn't far from the mouth of the sea; a six or seven metre high tide could be disastrous," he says.

Conservationists say strong tides around Nayachar could spread effluents from chemical factories located upstream and downstream, polluting the delta and affecting marine life. Scientists have found presence of heavy metals like lead and zinc in the waters at Ganga Sagar, where the Hooghly merges with the Indian Ocean.

"The water is already moderately polluted by effluents from factories at Haldia. A chemical hub will only add to this," says Bhattacharya. Besides, there is very little geo-technical information regarding Nayachar because a site-specific study hasn't ever been carried out, except a routine one in 1985, says gsi director Sujit Dasgupta. A gsi team visited Nayachar earlier this month but Dasgupta said it would take at least six months to complete a detailed study of the place.