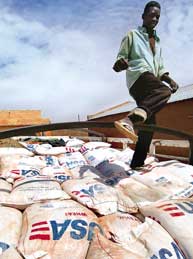 Wfp has announced to halve its food aid to Mozambique. The announcement has come ahead of the critical lean season between harvests, when food stocks generally run out.

In a statement, the food agency said the move is due to a 77 per cent shortfall in funding; it required us $10 million to feed at least 460,000 people till March 2007, when the next harvest is due. In Mozambique, more than 240,000 people have no food security and half of those people live in arid regions. Experts say the shortfall in donor funds could be partly because of the fact that the country has had a better harvest this season, than in previous years. Preliminary results of the 2006 assessment by the Mozambique government too indicate that food security and nutrition has improved substantially.

In the last week of October, wfp had said that it is facing a massive funding shortfall for its feeding programmes in seven South African countries: Lesotho, Malawi, Namibia, Swaziland, Zambia and Zimbabwe, including Mozambique. Earlier in September, it had withdrawn food-aid from another African country, Angola.