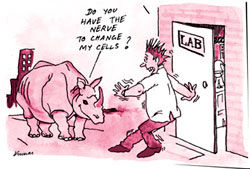 for the first time, one type of human cells have been turned into another kind. Conventional scientific wisdom states that once a skin cell, always a skin cell. But researchers at the University of Oslo, Norway, have recently proved this wrong. The scientists used chemicals found in the body to 're-programme' skin cells and turn them into nerves and immune cells.

They took skin cells and grew them in liquid containing chemicals that are produced by the nerves. The researchers found that after some time the skin cells started to look like nerves and they even activated genes which nerves use. Moreover, when these cells divided, the new cells looked like nerves. Similar changes occurred when the researchers put skin cells in chemicals made by the immune cells.

Although the researchers have not yet checked whether the new, re-programmed skin cells function as nerves or immune cells, they say their discovery can lead to treatments which carry the same promise as stem cell treatments without any ethical complications. If ordinary adult cells really can be re-programmed in this way, there is no reason in theory why cells from skin or hair could not eventually be used to replace damaged brain tissue, or rebuild a defective organ. Other researchers have described the finding as 'exciting', but emphasise that evolving new treatments would require in-depth studies. The Oslo researchers now plan to check how well their new cells would function.