What about nuclear transparency?

Activists say safety audits should be put in public domain 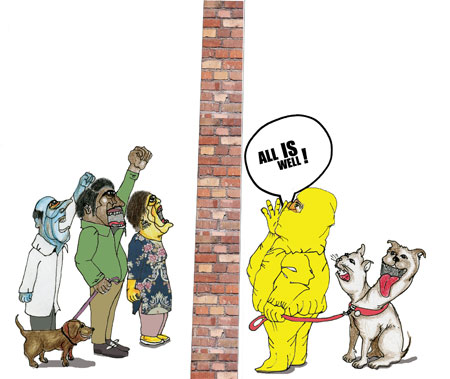 A group of over 25 scientists, bureaucrats and activists released a statement on April 19, demanding transparency in India’s nuclear power programme. The statement was released a day after a clash between policemen and those protesting the proposed nuclear power plant at Jaitapur in Maharashtra. One person was killed and eight were injured in the clash at Jaitapur.

In the aftermath of the Fukushima nuclear plant meltdown in Japan, fear of a similar disaster had made agitators more determined to fight the 9,900 MW project.

Referring to the nuclear crisis in Japan, the group said a stark rationale has emerged for abandoning nuclear energy. They indicated little faith in the government’s infrastructure for ensuring public safety. Critics say nuclear oversight in India does not follow the ideal model where the regulator is an independent body.

“In India the safety and promotion are under one roof,” says Karuna Raina of Greenpeace. The Atomic Energy Regulatory Board (AERB), which is entrusted with the task of conducting safety audits, and the Nuclear Power Corporation of India Limited (NPCIL), which sets up nuclear plants, both report to the Department of Atomic Energy (DAE). “There are no independent nuclear safety audits to give a clear picture. The communication is internal,” says T P Sreenivasan, former governor for India at the International Atomic Energy Agency, Vienna.

He adds, “It is time India accepted the International Atomic Energy Agency’s (IAEA) Operational Safety Review Team (OSART) programme which is available for safety review.” India has declined offers of safety inspections by OSART saying it is self-sufficient in doing so. According to Adinarayan Gopalakrishnan, former chairperson of AERB, the initial safety audit of nuclear plants in India is best done by AERB, despite the organisation being a subordinate institution of DAE. “In this initial audit, two aspects are crucially important, comprehensiveness and transparency,” he says.

The current government should take note of the fact that three similar stock-takings of nuclear safety in India were done in the past, he says. These were, in 1979, following the Three Mile Island accident; in 1986, after the Chernobyl accident; and the third, a more complete one, which the AERB conducted in 1994-95, he points out. DAE has not allowed the report from the audits to be made public, nor are any corrective steps taken by the department visible in case of any deficiencies brought out in the reports.

A way out, if any

AERB formed a committee on March 19 to review the safety of Indian nuclear power plants in the light of Fukushima disaster. It is looking at many new dimensions like the effects of two natural disasters at one time, and India’s preparedness and response to them.

The environmental impact assessment of the Jaitapur project makes no mention of the European Pressurised Reactor design and nuclear waste management. There is also little clarity about the project’s cost, says Neeraj Jain, convener of a non-profit at Pune.

All safety audit reports must be in the public domain, along with a detailed Action Taken Report. “Public should always be taken into confidence,” adds Sreenivasan. Scientists and bureaucrats have vested interests, and they try to cover up the lacunae, he points out.19 years of reportage on nuclear energy, quakes & tsunami
Armed against the nuclear
A tsunami of questions
India takes a step ahead on nuclear transparency
Nuclear fault lines run deep
Nuclear reality, damaged democracy
How vulnerable are India's nuclear power plants to disaster
After SEZs, nuclear power parks
Ratnagiri protests clearance to Jaitapur power park