What delayed launch of phase IV of AIDS control programme?

The much-awaited launch of the fourth phase of the National AIDS Control Programme (NACP IV), scheduled to begin on January 31, has been postponed.

Activists working with people living with AIDS/HIV say the recent decision of Supreme Court  which renders consensual sex between people of the same gender a crime may be a reason for the delay.

Deputy director general of NACO, Neeraj Dhingra, said that next date of launch is not decided.

In the earlier programmes of NACO, all groups, including men who have sex with men (MSM), injection drug users and female sex workers, were covered under NACP.

However, it may not happen this time because of the Supreme Court decision, which overturned the verdict of Delhi High Court on December 11, last year and termed gay sex as an offence. Section 377 of IPC which deals with unnatural sex is punishable with minimum 10 years to life imprisonment.

Whether courts consider this fact or not while giving the decision, the contribution of MSM in HIV is significant in India, say activists. In 2012, World Bank published a report which said: “Relatively little is known about the role of sex between men in India’s HIV epidemic, but the few studies that have examined this subject have found that a significant proportion of men in India do have sex with other men.”

According to the report, the highest HIV prevalence among MSM is in Chattisgarh at 15 per cent, Nagaland at 13.58 per cent and Maharashtra at 13 per cent. It said that MSM groups were found to be unaware of the HIV risk they face.

The World Bank report concluded that India’s efforts to promote safe sex among such people will play significant role in determining the success of its campaign. This argument is strengthened by the fact that India witnessed a decline of HIV prevalence among MSM from 7.41 per cent in 2007 to 4.43 per cent in 2011.

Muthukumar Natesan, who works in Kumbakonam district in Tamil Nadu with MSM, says that people are now scared. “They are afraid that they may be labelled criminals. After the recent court decision, more than 70 per cent people of MSM category have requested their name be deleted from official records.” Natesan is in touch with at least 1,000 such people.

After 2009, when the Delhi High Court de-criminalised gay sex, many people in MSM category were encouraged to admit their status at least before health workers and officials. “We also used the verdict to reassure people during counselling. But the recent decision has changed everything,” says Natesan.

“These people may approach NGOs and health workers for treatment but they will not admit about the gender of their partner, and if they give wrong information, future planning and chalking out new strategy will be challenging,” says Natesan.

President of AIDS Society of India, I S Gilada, however, blames the delay on lack of funding. He says India relies on others’ money to run its programme. Earlier, World Bank and many other global groups were giving funds. Now India has started spending some money but it is still only 50 per cent of total expenditure. The country needs to find a way to raise resources from within the country; for example, states can be asked to contribute some money. It also needs to be seen whether providing free treatment to all patients is feasible, he says while adding that those who can afford should not be given free treatment.

He, however, admits that government now needs clarity on how to deal with the new challenge after Supreme Court’s decision.

The earlier phases of NACP are said to have been effective in controlling HIV prevalence. NACP-I, which was launched in 1992 and later extended from 1997 to 1999, was the first strategic plan for prevention and control of AIDS in the country.

The second phase of the programme (1999 to 2007) aimed to reduce the spread of HIV infection in India through behavioural change and at the same time increase the ability to respond to the infection. In its third phase, NACP (2007-2012) tried to halt and reverse the epidemic by providing an integrated package of services for prevention, care support and treatment.

NACP IV aims to reduce new infections by 50 per cent and also provide comprehensive care, support and treatment to all persons living with HIV/AIDS.

India’s effort to control HIV infection is reportedly good so far. For example, HIV Estimations 2012 Report says that the scale-up of free antiretroviral therapy (ART) since 2004 has saved over 150,000 lives in the country till 2011 by averting deaths due to AIDS-related causes, says the report. The country has seen an overall reduction of 57 per cent in estimated annual new HIV infections during the last decade from 274,000 in 2000 to 116,000 in 2011, it says.  Considerable decline in HIV prevalence has been seen in female sex workers as well from 5.06 per cent in 2007 to 2.67 per cent in 2011.

Though India’s success in curbing AIDS/HIV prevalence has been lauded by world community, there are still many challenges ahead. As many as 116,000 new HIV infections among adults and around 14,500 new infections among children occurred in 2011.

The total number of people living with HIV/AIDS in India is estimated at 2.1 million in 2011 (see chart below for break-up). 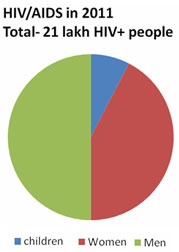 Besides, though AIDS/HIV prevalence has decreased in north-eastern states, new pockets of high HIV prevalence among drug users have emerged over the past few years. These states are Punjab, Chandigarh, Delhi, Mumbai, Kerala, Odisha, Madhya Pradesh, Uttar Pradesh and Bihar.

Judgement of the Supreme Court of India regarding the constitutional validity of Section 377 of the Indian Penal Code, 11/12/2013

HIV in Indian MSM: Reasons for a concentrated epidemic & strategies for prevention