What exactly are cattle fed?

In Punjab, too much limestone powder and urea: adulteration hardly a bother for feed-makers 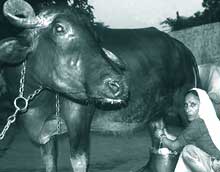 cattle feed manufactured in Punjab under various brand names contain harmful quantities of limestone powder (lsp) and urea, the Punjab Dairy Development Department (pddd) warned recently. This adversely affects the quality of milk produced, as well as the health of the cattle. In its report based on tests of cattle feed samples conducted from June 2004 to March 2005, pddd says of the 422 samples tested, only 218 met the prescribed standards. "The rest contain an excess quantity of lsp and urea," reveals Anil Kaura, director, pddd, Chandigarh.

lsp and urea are mixed in cattle feed on the pretext of supplementing its calcium and nitrogen content to increase milk yield. " lsp is calcium carbonate and nearly 40 per cent of urea is nitrogen. This nitrogen is used by the cattle to produce protein...If it [the mixing] is within the prescribed standards (one per cent by mass), it's good...In fact we recommend such judicious use," explains Neeraj, associate professor, department of animal nutrition, College of Veterinary Science and Animal Husbandry, Allahabad.

Cattle have the ability to utilise nitrogen from urea to meet part of their protein requirement. Their rumen houses billions of bacteria, fungi and protozoa. These microorganisms enable them to use the nitrogen, which is broken down into ammonia in the rumen. The microorganisms themselves use ammonia to build their own bodies, which in turn produce microbial protein. When the microbial protein is digested, amino acids are released. These are then absorbed into the blood stream of the animal, leading to higher milk yield.

Although mixing lsp and urea in cattle feed is permitted, most manufacturers don't follow the associated norms. pddd says too much lsp and urea damage the cattle's reproductive system. "The manufacturers add about 10 per cent lsp. This virtually replaces other ingredients, like rice bran and oil cakes, used in making cattle feed," says Kaura. " lsp is alkaline in nature and its excessive use increases the ph value of the cattle's rumen, which reduces its mineral intake. The health of the cattle and the quality of its milk deteriorate with less mineral intake by it," explains A K Garg, principal scientist, animal nutrition division, Indian Veterinary Research Institute, Uttar Pradesh. Increase in calcium intake also affects the cattle's phosphorous and zinc intake. "It is like a chain. If calcium intake is increased, phosphorous and zinc will not be available for it. Unavailability of these two will affect the availability of some other mineral too," he adds.

Likewise, too much urea in cattle feed affects the quality of the milk produced. "While a part of this ammonia is utilised for protein synthesis in the animal's system, a part is converted into urea in the liver. Most of this is excreted in the urine. A small part is also excreted in the milk," says M R Garg, senior scientist, National Dairy Development Board, Gujarat. Thus, the milk produced is laced with urea.


Cattle feed manufacturers are least bothered about the health of the animals. Their main aim is profit and use of lsp and urea in large amounts guarantees this. Cost of one kilogramme (kg) of lsp is Rs 0.6. Considering the cost of cattle feed to be Rs 4 per kg, if 5 kg lsp is added to 35 kg cattle feed, the actual cost of the 40-kg bag would be Rs 143. But it will be sold for Rs 160, at the rate of Rs 4 per kg, a profit of Rs 17.

Ashok Kumar Garg, superintendent (cattle feed), pddd, says: "Action under Section 7 of the Essential Commodities Act, 1955 have been taken against two unscrupulous cattle feed manufacturers and the registrations of four manufacturing units have been cancelled." pddd officials also claim that the use of lsp and urea in cattle feed has stopped completely due to increased surveillance. But complaints of such irregularities have emanated from other states and in other sectors too. Complaints of milk laced with fertilisers is common in Punjab. The manufacture of "artificial" milk from urea, white paint and other harmful substances is also rampant. Does the government have any concrete plan to stop such adulteration?